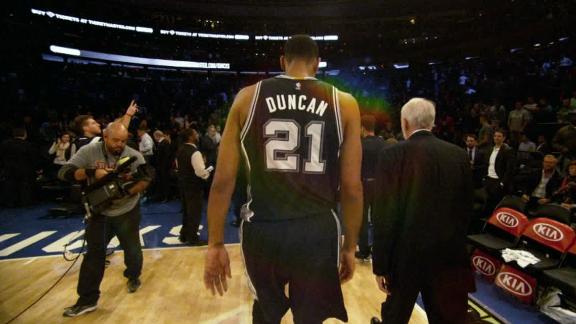 As the San Antonio Spurs prepare to retire Tim Duncan's No. 21 jersey Sunday night, Spurs coach Gregg Popovich has described Duncan as "like my son."

"I love him dearly," Popovich told ESPN's SportsCenter in an interview earlier this week.

Told that Spurs president R.C. Buford once described the two as "soulmates" to ESPN.com, Popovich said: "We're more soulmates in life than we are in basketball. I've been on his fanny so many times throughout his 19 years, and half the time he agrees with me and half the time he thinks I'm a nut. And he just is polite enough and mature enough to just ignore me and go back out on the court, which allowed me to coach everybody else all those years. But off the court, that's where we're soulmates."

Popovich, though, said he and Spurs veterans Tony Parker and Manu Ginobili try to bring up Duncan's absence "very rarely" after the big man's 19 stellar seasons in which he led San Antonio to five championships.

"I think about it more off the court than I do during games or practices," Popovich told SportsCenter. "You get busy, you get into what you're doing, but I miss him on the plane and on the bus trips and in the locker room after a win or a loss. Just the banter back and forth that we've had for, whatever, 19 or 20 years. I miss all of that.

"We might be somewhere at a certain moment in time and somebody says something [about Duncan] in a melancholy manner or reminiscing about such and such because we were all there at some point. But that's only happened a couple of times. Everybody has to move on."

Duncan, though, has been a relatively frequent guest at Spurs practices this season, working out with former teammates or new Spurs like center Pau Gasol, or counseling younger players such as forward Jonathon Simmons.

"We never know [when Duncan will show up], honestly. It's totally random. Everything is extemporaneous. He's there or he's not. We might walk through the building and all of a sudden he's in there lifting weights. We put a locker for him in the coach's locker room in the practice facility and at the AT&T Center so he comes whenever he feels like it."

Popovich, the only head coach Duncan has ever known in the pros, says now that he had a strong inkling the 40-year-old was bound for retirement after San Antonio's second-round elimination in the playoffs last season against Oklahoma City.

"I was pretty sure that it was [the end]," Popovich said. "I knew he'd take time during the summer to make a final decision and we'd talk now and then, but I know he was frustrated because he had told me a couple years earlier, 'When I can't do what I need to do to help the team, I don't want to do it anymore.' And it would frustrate him if some young whipper-snapper would make a move on him or do something and look at him like, 'Yeah, I got you.' I wanted to run on the court [and say]: 'No, no, no. That wasn't Tim Duncan that you just did that to.' But the young kid would have the gall to act that way, and I know that frustrated the hell out of him."

Popovich, though, acknowledged that the famously media-shy Duncan had to be talked into Sunday night's postgame ceremony after San Antonio takes on the New Orleans Pelicans.

"It was a tough one," Popovich said. "He knew that, in the end, he had to do it because he knows he owes it to the fans, more than anything, who've come out and supported him through all those years. But that's really the only reason he's doing it. He doesn't want any of the accolades, he doesn't want to sit there in a chair and listen to us talk about him. He's dreading it. I even had to convince him, you know, 'They're going to have quite a few people in, so I thought, you know afterwards, we'll go get a bite or a Coke or a glass of wine or a beer or something and add a little food.' [Duncan said,] 'Nah, I'm not sure I want to do that.' So I said: 'Timmy, wait a minute. All of these people are going to come from everywhere and they're going to pay for flights and hotel rooms and you're going to shake their hand and say take care, I'm going home?' He said, 'I guess I can't do that, can I?' I said, 'No, you can't do that.' So we'll have a little get-together afterwards."

Saad Yousuf of ESPN Radio in Dallas (103.3 FM) contributed to this report.