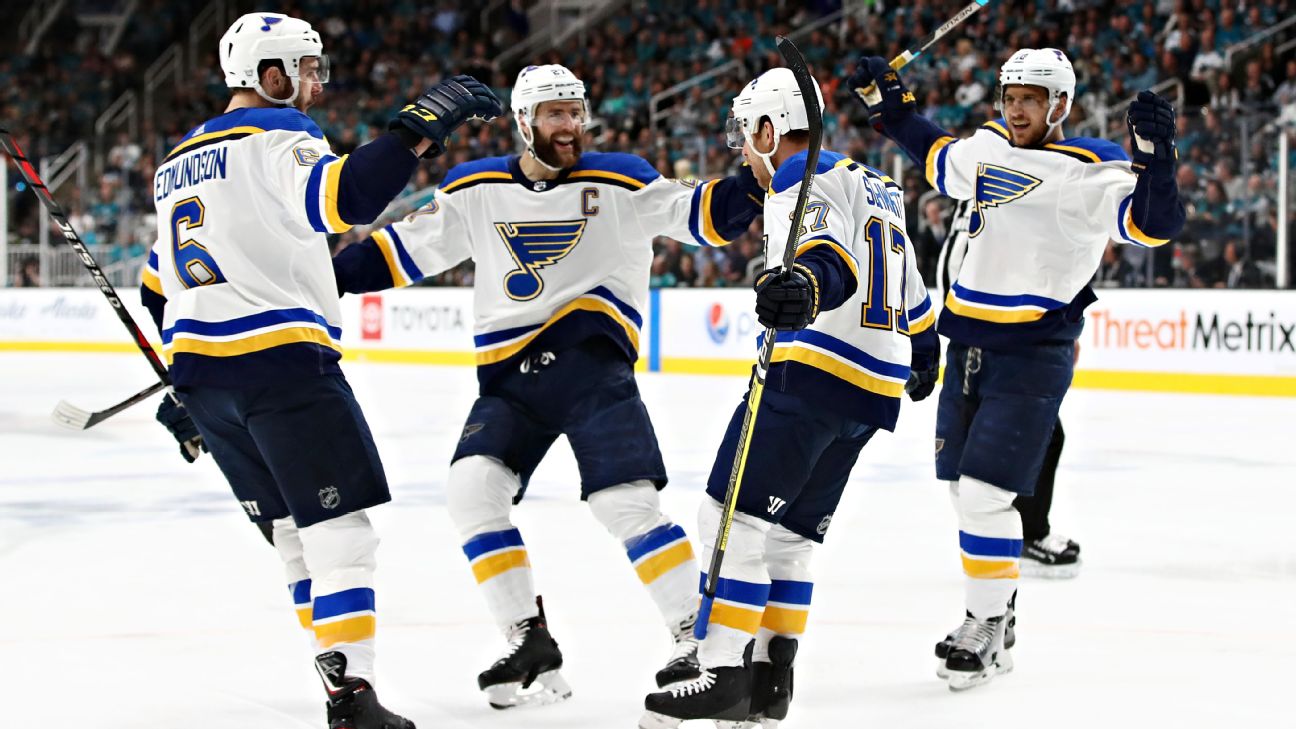 Now that's the St. Louis Blues team that rolled through Winnipeg and Dallas en route to the Western Conference finals. After their 4-2 win, the series is now tied 1-1 with the San Jose Sharks.

Here's what happened in the NHL last night (check out replays of every playoff game on ESPN+) and what to watch for tonight, in today's edition of ESPN Stanley Cup Playoffs Daily:

What is it about even-numbered games and the San Jose Sharks? In odd-numbered games, the Sharks are 8-1 with a plus-14 goal differential this postseason. In even-numbered games, they're 1-6 with a minus-13 goal differential. The trend continued in Game 2 against the Blues, although St. Louis ensured that it would with much better puck management, another outstanding bounce-back performance by goaltender Jordan Binnington and offensive contributions from a variety of players.

1. Robert Bortuzzo, D, St. Louis Blues. The Blues defenseman has played in just eight of their 15 playoff games and hadn't scored a goal in 30 previous postseason games. But in Game 2, he scored the game winner on what Ryan O'Reilly called "one of the hardest backhands I've seen."

2. Logan Couture, C, San Jose Sharks. The playoffs' leading scorer did it again in Game 2, trying to single-handedly lead the Sharks back with a short-handed goal at 4:55 of the second period and then another goal at 6:54. He now has 13 goals and 19 points to lead all scorers.

The Blues' fourth goal was a thing of beauty thanks to that spinning no-look pass from Alexander Steen to Oskar Sundqvist.

Every Sharks forward not named Logan Couture. The Sharks' offense was a dud in Game 2, including an 0-for-2 night on the power play. Kevin Labanc was a minus-3. Tomas Hertl, one of the best home-ice scorers in the playoffs, didn't have a shot on goal. "You can't hope to win a game," coach Peter DeBoer said. "They're all different games. Our heads were in the right place. You have to give [the Blues] some credit. They played a hell of a game; we didn't work through that to earn offense."

The Hurricanes return home in a significant hole, but home has been good to them. Carolina has won seven straight in Raleigh, where they average 3.22 goals per game and 2.46 goals against. "They haven't allowed us to do what we want to do, but shame on us for not being able to instill our game," captain Justin Williams said. "We just need to rediscover that and redefine ourselves."

The only thing we pause Gloria for is Chief. #stlblues>#WeAllBleedBlue>pic.twitter.com/0Svkj3iFZD - St. Louis Blues (@StLouisBlues) May 14, 2019

"We've been here before. We know how to handle this." -- Sharks coach Peter DeBoer on blowing another Game 2. 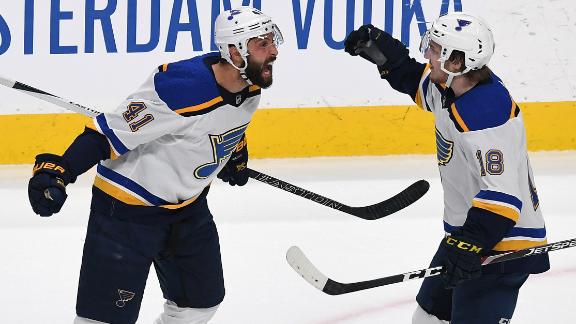