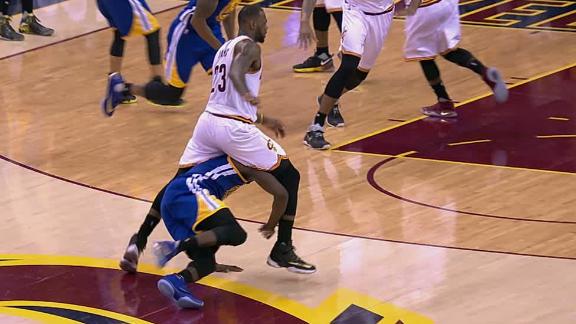 Draymond Green,suspended for Game 5 of the NBA Finals, watchedLeBron James and Kyrie Irving send the series back to Cleveland from the Oakland Coliseum next door to Golden State's Oracle Arena on Monday.

The Warriors said Green changed his mind several times Monday morning before deciding on a plan. TheAthleticseven extended Green an invitation to throw out the ceremonial first pitch, but he declined.

"He would like to keep a low profile," A's spokeswoman Catherine Aker said.

Under league rules, Green could not be in the building Monday night when the Warriors had to put their celebration on hold after Cleveland's112-97 victory in Game 5 cut their series lead to 3-2. If a player attends a game while suspended, he faces a $2,000 fine.

So Green watched the A's take on the Texas Rangers on Monday, with the first pitch set for 10:05 p.m. ET.

Green was seen driving away from the players' parking lot at Oracle Arena with Lynch shortly after midnight ET. He never went to Oracle after the game ended.

Sources told ESPN's Marc Stein that Green had to be out of the arena two hours before tipoff, but he would have been allowed by the NBA to enter the arena immediately after the game to join in the celebration had Golden State won.

The Oakland Coliseum is connected by a tunnel to Oracle Arena.

Green was suspended after he was assessed a flagrant foul 1 by the league for his actions in Game 4. The play that drew the flagrant foul came with less than three minutes left in Golden State's108-97 victory over the Cavalierson Friday, whenGreen and LeBron James got tangled. James stepped over Green after the Warriors forward fell to the court, and Green swung his arm and appeared to make contact with James' groin area. James immediately turned around, and the two players went chest-to-chest as play continued.

The NBA called Green's action a"retaliatory swipe of his hand to the groin" of James.

"It's another test," guard Shaun Livingston said of playing without emotional leader Green. "We've went through a lot of tests this year. It's kind of the ultimate being in the position that we're in, so it's a great opportunity for a lot of guys and for our team and coaches. ... It's a cohesion thing throughout the whole team. We rely on our chemistry, we rely on each other, we play for each other. One guy is not just going to make up what Draymond brings to the table. It's all the little things he does that wins championships."

Smiling and being playful, Green was his upbeat, high-energy self -- or at least appeared so -- during a shootaround Monday morning at the team's downtown practice facility. He pulled off a set of pushups between taking shots, let out a loud "Ahhhhh!" for all to hear and animatedly pointed his right arm in the direction of center Andrew Bogut before disappearing as the Warriors wrapped up their day-of-game preparations.

While coach Steve Kerr had advised all of his players to stay ready because there was potential for some varying lineups and rotations, Livingston said Green hadn't addressed the team. There was a lot of production to make up for without Green's postseason averages of 15.3 points, team-high 9.6 rebounds and six assists -- not to mention his defense.

The flagrant 1 gave Green his fourth flagrant foul point of the playoffs, which carries an automatic suspension.Green will be docked a game check for the suspension, which would cost him about $140,000.

"The cumulative points system is designed to deter flagrant fouls in our game," NBA executive vice president of basketball operations Kiki Vandeweghe said in a statement. "While Draymond Green's actions in Game 4 do not merit a suspension as a standalone act, the number of flagrant points he has earned triggers a suspension for Game 5."

Earlier in the postseason, Green was assessed a flagrant 2 and fined $25,000 for kicking Oklahoma City Thunder center Steven Adams between the legs. He received a flagrant 1 for throwing down Houston RocketsforwardMichael Beasley in the first round.

Several other actions by Green have been reviewed by the league, with no punishment given.

James was asked Sunday what his intentions were when he stepped over Green. He said play was going on and he was attempting to get back into the play and wasn't trying to bait Green.

The league completed its investigation over the weekend, looking at numerous angles of the play and interviewing James and Green as part of the process.

The NBA also announced that Cavaliers coach Tyronn Lue has been fined $25,000 for his public criticism of the officiating after Cleveland's Game 4 loss.

In reaction to the suspension, the Westgate Las Vegas SuperBook droppedthe Warriors from a 6.5-point favorite to a 6-point favorite.

Information from ESPN senior writer Brian Windhorst and The Associated Press was used in this report.

The three flagrant fouls that resulted in Green's suspension
Draymond Green has been a habitual line-stepper all postseason, and he has now accrued four flagrant foul points which led to his suspension for Game 5.

Kerr on Green suspension: We're moving on to the game
Warriors coach Steve Kerr says the team accepts the league's decision to suspend Draymond Green for Game 5 of the NBA Finals and explains how Golden State will look to move on and clinch a second consecutive championship.