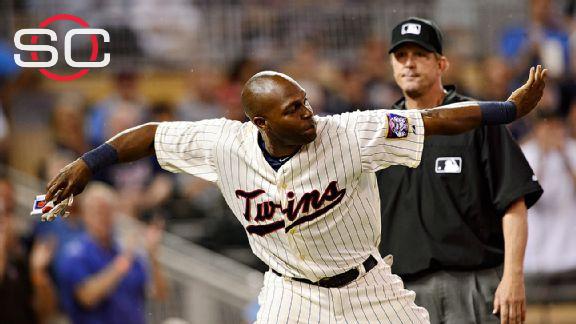 ESPN
MINNEAPOLIS -- Torii Hunter was thrown out of Wednesday night's game for arguing a called third strike late in the Twins' loss to the Royals,and became animated and needed to be briefly restrained in the aftermath.

Hunter yanked off his elbow pad, shin guard and batting gloves and threw them towardthe batter's box after the ejection by plate umpire Mark Ripperger.

For good measure, Hunter ripped off his jersey and tossed that over the first-base line before retreating to the dugout in the eighth inning of the 7-2 defeat.

Hunter appeared to make contact with one of the umpires during the rant, so could face a suspension from the league.

"That's always a possibility," Twins manager Paul Molitor said. "I don't want to try and predict or speculate how the league offices are going to respond to his actions. I'm sure it would be reviewed and considered as to whether a suspension is appropriate or not."

The loss capped the first series sweep this season of the Twins at home.

Molitor was given his first career managerial ejection during the conflict, too.

"I became a sideshow to the big show, from what I hear," Molitor said. "But those things, they happen in a game. They happen with different umpires, good umpires, and we'll just move on."

Hunter, hitting .268 with eight home runs and 36 RBIs in his 17th big league season, went 0-for-3 with a walk and two strikeouts from the cleanup spot for the Twins.

"You know what he's trying to do," Kansas City manager Ned Yost said. "He's trying to fire everybody up and get 'em going."

The series provided a poignant reminder that the Twins haven't really caught up to the reigning American League champion Royals even if they spent the past week in first place from the thrust of their 20-7 mark in May.

The Twins had the best home record in the league until the Royals arrived this week and dropped them to 20-12.

"They've been in a little slow-bat period themselves, and he's trying to get everybody fired up and get 'em going," Yost said. "It's a bit entertaining."

Hunter trying to fire up team with tantrum?
Buster Olney discusses Twins OF Torii Hunter's ejection for arguing balls and strikes and his ensuing tirade.

Hunter throws tantrum after ejection
Right fielder Torii Hunter is ejected after arguing with the home plate umpire over a strike-three call in the Twins' 7-2 loss to the Royals.