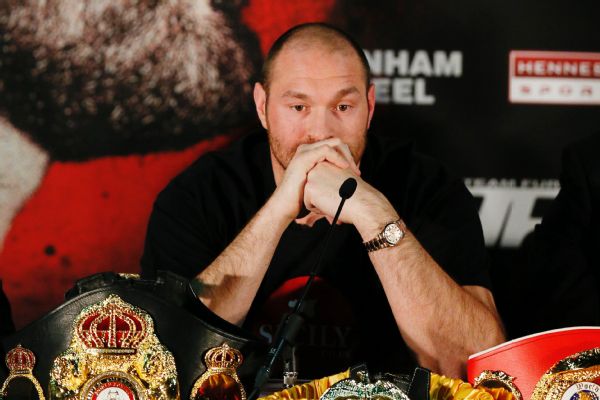 Fury, who has admitted that he has been heavily using cocaine and drinking in recent months, said he vacated the belts to focus on his treatment.

"I feel that it is only fair and right and for the good of boxing to keep the titles active and allow the other contenders to fight for the vacant belts that I proudly won and held as the undefeated heavyweight champion of the world when I defeated the long-standing champion Wladimir Klitschko," Fury said in a statement.

"I won the titles in the ring and I believe that they should be lost in the ring, but I'm unable to defend at this time and I have taken the hard and emotional decision to now officially vacate my treasured world titles and wish the next-in-line contenders all the very best as I now enter another big challenge in my life which I know, like against Klitschko, I will conquer."

Even if Fury had not vacated the belts, he likely would have been stripped by the sanctioning bodies because of the positive drug tests and inactivity. Also, his boxing license was suspended Thursday by the British Boxing Board of Control after a hearing.

"Tyson will still be the linear world heavyweight champion in everyone's eyes. He beat the most dominant champion in the modern era of boxing on an amazing night in Germany to earn that accolade, and that will never change," said promoter Mick Hennessy, who has promoted Fury for his entire career. "Whilst it's heartbreaking to see Tyson vacate the world titles that he worked so long and hard for all his life, what's paramount now is that he receives the medical treatment along with the love of his family and friends and the support of the boxing world to make a full recovery."

Fury (25-0, 18 KOs), 28, of England, scored a massive upset Nov. 28 in Dusseldorf, Germany, where he outpointed longtime world champion Klitschko to win the belts and claim the division lineage. But he was unable to handle the pressures that went along with the sudden and intense spotlight. He pulled out of a July 9 rematch, slated to take place at Manchester Arena in his hometown of Manchester, England, claiming an ankle injury.

He later said the real reason for withdrawing was because he had become so depressed that he stopped training, began using drugs and continued to drink heavily.

The fight was rescheduled for Oct. 29, also at Manchester Arena, but it was canceled Sept. 23 because Fury was having mental health issues and still drinking and using drugs. Then, on Sept. 29, came the first positive drug test from a sample collected by the Voluntary Anti-Doping Association on Sept. 22. A sample collected by VADA on Sept. 21 also turned up positive on Oct. 12.

"Tyson will be back stronger from this, and I will make sure, no matter what we have to deal with, Tyson not only comes back but will reclaim what's rightfully his," said Peter Fury, Tyson's uncle and trainer. "I'm very proud of my nephew's achievements."

With the belts vacant, the sanctioning bodies must outline how they will be filled, and the top heavyweights are jockeying for position.

Klitschko, idle for nearly a year waiting for the rematch with Fury, hopes to fight for the belts, and his team has been in negotiations with England's Anthony Joshua (17-0, 17 KOs), who holds the IBF title. That belt was stripped from Fury 10 days after he beat Klitschko because he was obligated to face Klitschko in an immediate rematch and unavailable to fight mandatory challenger Vyacheslav Glazkov.

Glazkov instead faced Charles Martin for the vacant title and got knocked out in the third round in January. Martin then got pummeled by Joshua in two rounds on April 9.

While Klitschko could challenge Joshua for his belt on Dec. 10 in England, their camps hope to convince the WBO and WBA to allow the vacant titles to also be at stake. But other heavyweights will challenge that.

The WBA has not made any ruling yet, and the WBO plans to address the situation at its annual convention, which begins Monday in San Juan, Puerto Rico.