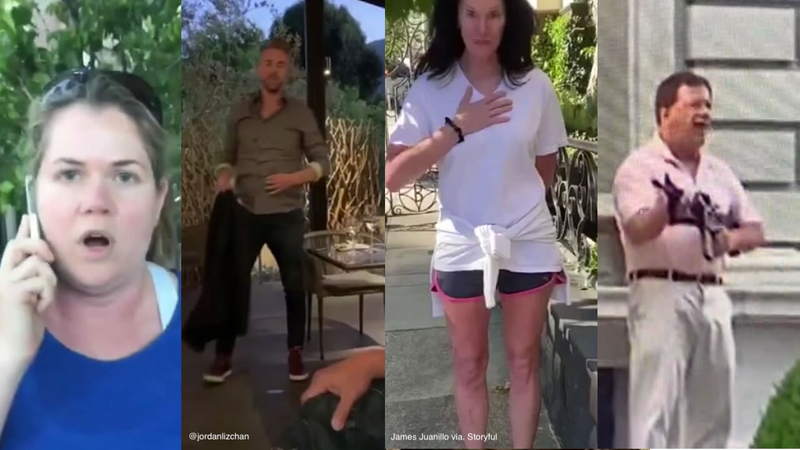 SAN FRANCISCO -- In the last few weeks, Americans have been subjected to and been fascinated by what has become an almost daily parade of, well, let's be kind and just refer to them as extremely bad moments, all caught on camera.

If we watched only the videos, it would seem that our world is full of entitled, white, Karens or Kens shouting, "All lives matter!" and telling people of Asian ancestry, "Go home. You don't belong here."

Have you wondered what is happening here? With the stress of a pandemic, is this behavior becoming more widespread?

"I think it's the fact that we have cameras everywhere," said Dr. Thomas Plante, a professor of psychology at Santa Clara University. "There are a lot of people who are tense and frustrated and a lot of them have a short fuse. Small incidents set them off."

"Think before you speak. My mom taught me that a long time ago," said reporter Stanley Roberts, who made a franchise of catching people in the act of behaving badly. "A long time ago we had people with pitchforks and fire trying to get people who were bad. Now we have cell phones."

RELATED: What motivates a 'Karen'? Experts weigh in on popular term

Any presumption of privacy is now long gone. So, we asked why people seem to dig themselves in even deeper when they know multiple cameras may be watching every move and recording every word?

"It is really hard for a lot of people, once they get launched, to dial back, take a deep breath, and say hold it here," said Dr. Plante. "We need to appeal to our inner angels."

"They are trying to defend their position but it just puts them in a deeper hole!" added Roberts. "People don't realize that once a camera is rolling, it does not discriminate. It will roll for everything."

Now, with the internet, those small cameras have world-wide influence when, rightly or wrongly, we see bad behavior publicly pilloried and vilified. It is human nature that when some of us see those videos, we feel so much more virtuous.

"There is no due process anymore. Just mob mentality," said Dr. Plante. "There is a diffusion of responsibility when you're alone and anonymous on your computer. You can say remarkable things online and there is no consequence."

Such episodes can live online forever. Often, they lead to job firings and even death threats. Do they serve a greater good?

"This is a way to get out what we knew was going on but couldn't prove it," said Roberts. "We used to say they were racist, but it is better to show the video."

So now we have it. If George Orwell was still around, he might say that he warned us.

Welcome to the 21st century.