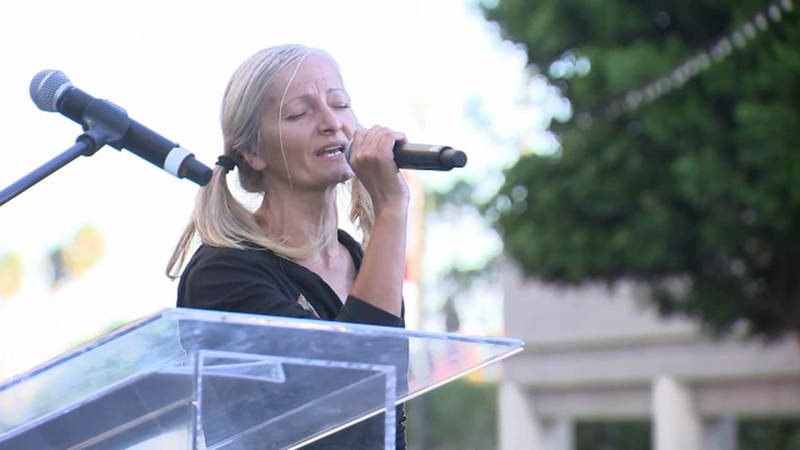 Zamourka - known as the "Subway Soprano" after a Los Angeles police officer posted the video of her singing on social media - performed at the grand opening of the new Little Italy in San Pedro, at the invitation of L.A. City Councilman Joe Buscaino.

She expressed how grateful she was to be able to share her talent.

"Eventually, I did touch your spirits and I'm so glad about that, that I could touch your heart with my voice," Zamourka said to the audience. "Thank you so much for all of this that's happening right now. I really thank you. I'm so overwhelmed."

A Grammy-nominated music producer offered Zamourka, who says she has no formal vocal training, a recording contract last week.

The Russian-born musician, who was once homeless and struggling to survive, reunited with the LAPD officer whose instinct to film her operatic performance has generated a surge of attention for Zamourka.

"I actually wrote a deal memo to her. I don't even know her. I've never done that in my entire life, it's crazy," Joel Diamond said.

One week ago, Emily Zamourka was homeless, anonymous and struggling to survive. Now fame and maybe a little bit of fortune are calling her name.

In an appearance on Good Morning America on Oct. 3, she tried to put it all in perspective.

"I'm overwhelmed and I'm ready to be a working artist," Zamourka said.

On top of a possible record deal, two GoFundMe campaigns have raised more than $95,000 to help her find a place to live.

Zamourka says her life was derailed two years ago when a man grabbed her violin after a performance and destroyed the treasured instrument that she says was worth thousands of dollars.

"It was my treasure, and it was my income, too. It was everything," she said.

The subway singer seen in a viral video delivering a stunning performance at a Koreatown Metro station shared her emotional story.

It happened outside Clifton's restaurant in downtown L.A. Whitney Smith, a friend and fan of Emily's musical talent, was there.

"This was a very horrible, bad thing to do and that's the cause of me being where I'm at now," she said.
Her luck turned around when the officer posted the video online.

Since then, people are stopping her on the streets for photos and hugs, and she's been invited to perform at the grand opening of Little Italy in San Pedro this weekend.