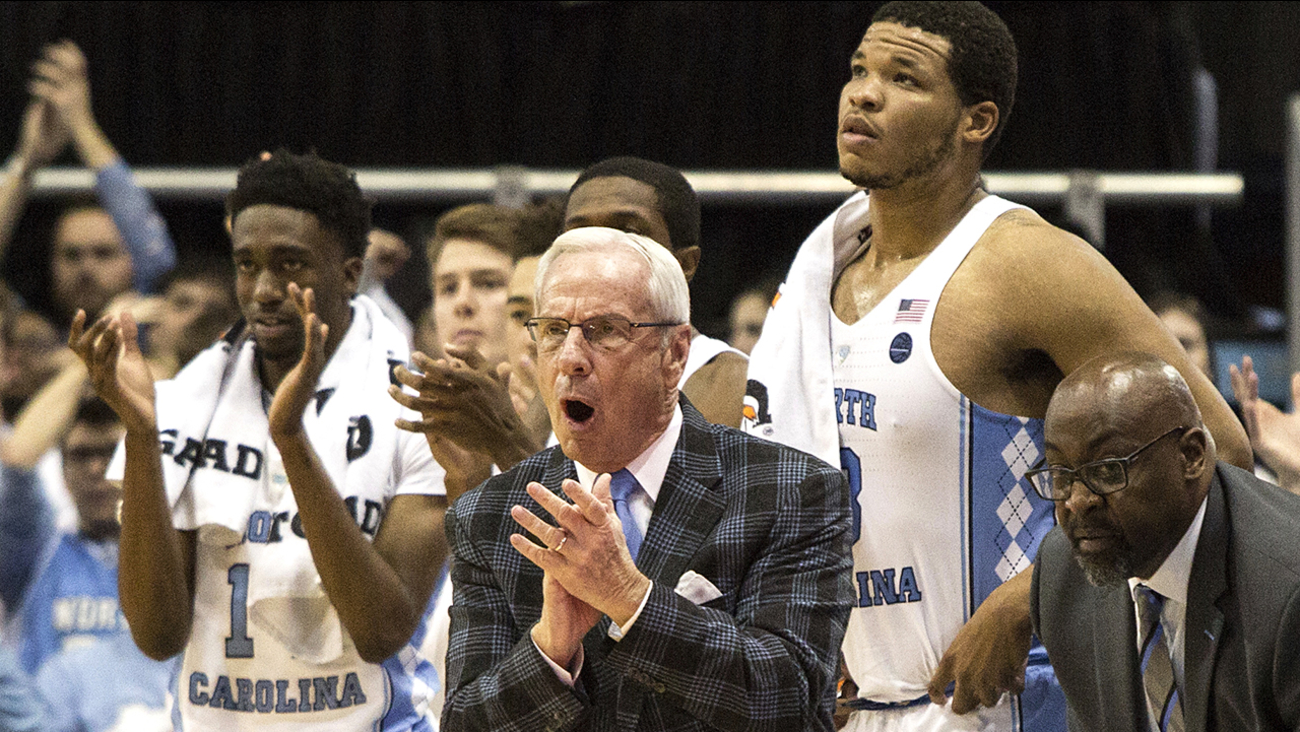 The Hall of Famer didn't wait very long before turning his attention back to the present.


Roy gets his custom 800 Jordans pic.twitter.com/xJkJljo6T1

"It's a special moment, but you know what I really love?" Williams asked the crowd as he pointed to his current players. "No. 17, for this team."

Williams became the ninth Division I coach to reach 800 wins with the ninth-ranked Tar Heels' 85-68 victory against Syracuse on Monday night, keeping them near the top of the Atlantic Coast Conference standings.

Another good crowd on hand at Dean Dome with Syracuse in the house. pic.twitter.com/d1lzEOi4JT

Isaiah Hicks scored 20 points for UNC (17-3, 5-1), which shot 52 percent and never trailed after the game's opening possession. The Tar Heels led 42-30 at halftime and then stayed a step ahead of the hot-shooting Orange after the break to give Williams the milestone win.

The 66-year-old Williams noted it had been a difficult few years, a stretch that includes the 2015 death of mentor Dean Smith and a multiyear NCAA academic investigation continuing to hang over the school.

Roy's first win as a head coach was in Alaska, over Alaska-Anchorage. Been kicking mostly contiguous states in the butt ever since.

"From 700 to 800 (wins), the kids have been my salvation," Williams said. "You guys know the junk that's been going on. I've taken a lot of it personally and I was not involved. But if it wasn't for the kids and the way they've made me feel and made me really enjoy coaching and enjoy life everyday - that's the special thing."

Williams reached 800 wins in his 29th season as a head coach, with 418 of those coming in 15 years at Kansas. He joined a list that included the man on the opposing sideline: Syracuse's Jim Boeheim.

"He's getting as old as me - that's how you get to those numbers," Boeheim quipped.

Some faces from the past were onhand to help Roy Williams celebrate his 800th career win.

"He's one of the top coaches who have ever coached in college basketball, I believe," Boeheim continued. "If you look at his numbers at Kansas and here, what he's done, there's very few people who have done that."

Tyler Lydon scored 26 points for Syracuse (11-8, 3-3), which got as close as three early in the second half, but never pushed ahead. The Tar Heels ultimately ran off a 7-0 flurry in the final 5 minutes to stretch the lead back out to 15.

The Tar Heels played their second straight game without freshman big man Tony Bradley Jr., who was out with a concussion, but the duo of Meeks and Hicks took care of the frontcourt production, with Hicks hitting the 20-point mark in consecutive games for the first time in his career.

UNC has now won five straight since its loss at Georgia Tech in its ACC opener.

Next up for the Tar Heels is a trip to Boston College on Saturday.