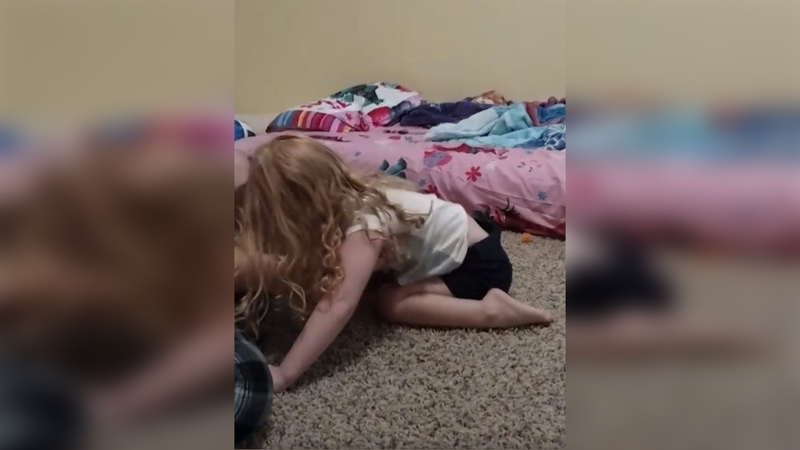 LA GRANDE, Oregon (WTVD) -- Parents in Oregon had the scare of a lifetime after their young daughter was left temporarily paralyzed by a tick bite.

On May 14, Amanda Lewis said her daughter, Evelyn, became fussy after her bath and was refusing to stand up.

However, the next morning she said Evelyn was having problems standing, adding that she could barely walk, crawl, or use her arms.

She and her husband decided to film a video and send it to their family to see if they had any idea of what could be wrong with their daughter.

However, after the symptoms became worse Evelyn was rushed to the ER.

A few minutes later, a doctor found a tick hiding in Evelyn's hair.

She was diagnosed with tick paralysis, a disease that attacks the use of a person's muscles.

Symptoms like numbness of the legs and muscle pains begin after a tick has attached itself to a host, typically on their scalp.

Doctors said symptoms improve once the tick is removed; however, they suggest paying extra attention to pets because the disease can be fatal to dogs.

After Evelyn started to improve, Lewis shared the video on her Facebook page to warn other parents to be on the lookout.

"The ticks are out like crazy right now in this area so if your children or dogs start acting a little off, check them thoroughly for ticks," she wrote. "My husband and I are still in shock that this happened to our baby girl and I'm glad we were able to spread some awareness about this. It's not terribly common for this to happen but it's good to be aware that if your children or pets start having weakness in their limbs to look for a tick!"

"Evelyn is doing much better," Lewis said. "It took her until the next morning to start acting like herself again... I feel awful for not having seen the little bugger sooner, but I never would have even thought to look for a tick. It's crazy that a little bug can do this!"