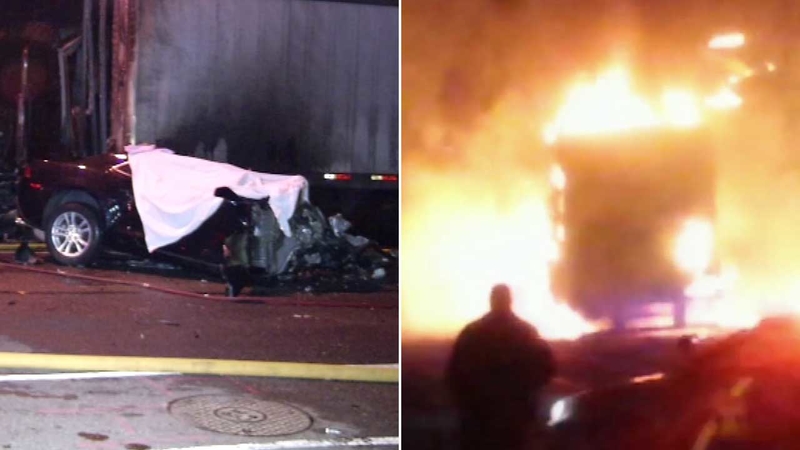 VIDEO: 3 killed in fiery crash on Torresdale Ave. in Holmesburg

PHILADELPHIA -- Three people are dead after a passenger car slammed into a parked tractor trailer causing a massive fire on a Northeast Philadelphia road.

The incident occurred around 2:45 a.m. Sunday on the 8100 block of Torresdale Avenue in the city's Holmesburg section.

Authorities say a Chevrolet Camaro occupied by three people was traveling north on Torresdale Avenue at a high rate of speed. When the vehicle crossed Rhawn Street the driver lost control, the vehicle then spun and slammed into a parked tractor trailer.

Police provide information on the fatal crash on Torresdale Ave.

The impact caused the tractor trailer and the passenger car to burst into flames.

Authorities tell Action News that fuel from the truck ran down Torresdale Avenue where the highway slopes under a freight train bridge, and a second tractor trailer that was parked there then caught on fire.

Three people inside of the car that struck the tractor trailer were killed in the fiery crash.

The Action Cam was on the scene of where a car and two tractor trailers went up in flames in Holmesburg.

Police tell Action News that arriving officers and firefighters made several attempts to rescue the three occupants but were pushed back by the intense flames.

Philadelphia Fire Dept. Battalion Chief Michael Senski explains, "There was a couple rescue attempts, that I understand. They did an excellent job of stopping the spread of the fire and the spill - the fuel spill and the herbicide spill, containing that to Torresdale Avenue."

A hazmat team from the Philadelphia Fire Department responded to the scene to assess the damage due to the fuel spill, as well as contain a pesticide spill from one of the trucks involved. An additional concern is runoff to the Pennypack Creek, which runs near the accident scene.

So far there is no word on the age or gender of the deceased victims.

Authorities expect Torresdale Avenue to be closed for most of the day Sunday as crews work to clear the scene.

The investigation continues into all the circumstances that led to the crash.