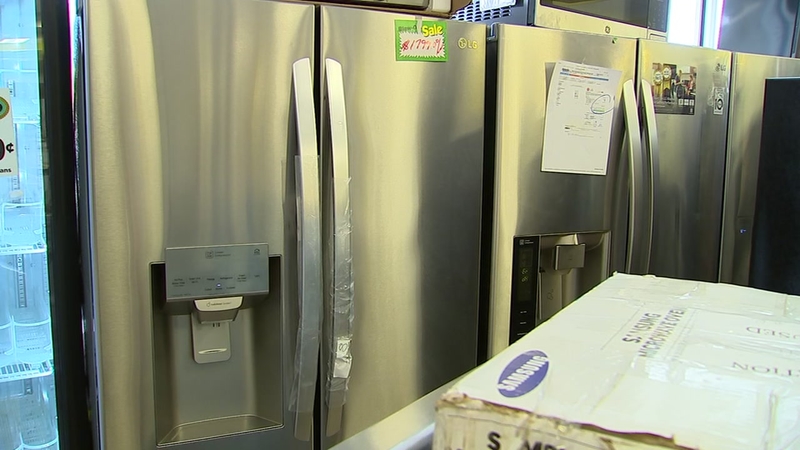 Why you should check for a manufacture sticker when buying appliances

When it comes to buying a new refrigerator, washing machine or any appliance, typically you're concerned with the color, its features and all of the bells and whistles.

Before you even look at all of that, first make sure it has manufacture ID sticker on the inside of the appliance. If it doesn't, it could cost you.

Raleigh homeowner Ruth Ayala-Carmona was willing to overlook some minor dings and dents when she was buying what she thought was a brand new LG refrigerator from Discount City Inc.

Ruth said having the manufacture warranty made her feel the purchase was secure.

After the refrigerator was delivered, Ruth said everything worked except the water and ice dispenser.

She filed a warranty claim with LG, and a technician was sent, but he wouldn't fix the problem.

"LG proceeds to tell him that that refrigerator is not a legal refrigerator, that they can't cover it, that it is not covered by warranty," Ruth said.

The reason her refrigerator was not covered was that it was missing the appliance ID sticker, which is inside the fridge and is put on by the manufacturer with the serial and model numbers.

"Oh, he was very upset. He said there was no such thing, that he had no idea, that he was going to contact LG, that there is something wrong," Ruth said.

I also went to the Raleigh store to get some answers and met with the owner Ibrahim. He said he bought the new LG refrigerator along with more than 30 others from his North Carolina dealer.

He showed us how the representative, who sold the items to him, showed him the stickers with the model and serial numbers on the outside of the refrigerators.

While there are stickers on the outside, inside the fridge where the manufacturer puts its sticker, it was missing.

"So I had no idea that these things did not have serial numbers on the inside," Ibrahim said.

I tried to track down why the ID sticker was removed. I contacted LG and they didn't get back to me, but a rep from GCR Corporation out of Chicago did respond.

GCR is a refurbishment and service center for many manufacturers, including LG. A rep said as part of their deal with LG, they removed the ID sticker and then sold the refrigerators as is, no warranty.

A representative with GCR said they sold them to one liquidator, who sold them to another liquidation company in North Carolina, who then sold them to Discount City Inc.

The GCR rep said the units could be sold as refurbished, but they should not be sold as new. "I had no clue until you came in here today," Ibrahim said,

He thanked us for bringing this to his attention and added: "If any customer has any concern they can contact me directly and I will take care of them."

"The things you look for when you buy an item like this. People need to be educated about this tag that's super important that I had no idea about," Ruth said.

The troubleshooter takeaway is if you are buying an appliance, look for that manufacture sticker on the inside of the appliance to see if it's there.

One major reason, aside from warranty information, is that you want this to check for recalls with the serial and model numbers. If it's missing, that could be a red flag.

In fact, in North Carolina, it's against the law to remove the permanent serial number or manufacturer's identification plate with the intent thereby to conceal or misrepresent the identity of said item.