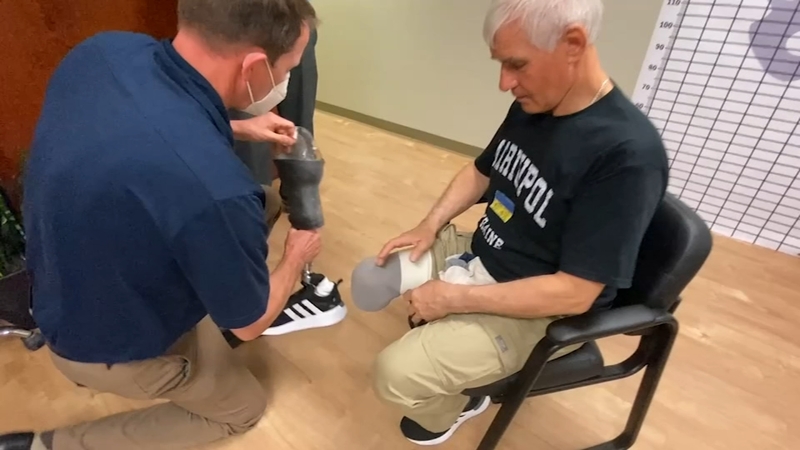 WAKE COUNTY, N.C. (WTVD) -- Oleksandr Karikh has been though quite a journey to be in Wake County and on the way to receiving a new prosthetic leg. He and his wife are only here through stubborn determination.

They fled Mariupol, Ukraine as Russian troops were bombarding the city.

The couple hide in an underground bunker with strangers and freezing temperatures.

At some point, Karikh was able to get to his car and drive them out of the war zone.

It was during this chaos the amputee's prosthetic leg was damaged, but he continued pushing himself to forward.

The community is rallying now to help Karikh and offering him a new prosthetic.

"He says he's very, very grateful that they help him cause his leg is almost out of service right now and he's afraid he won't be able to go where he needs to go," his daughter Ohla translated.

The couple is living with their daughter in Fuquay-Varina.

There is an online fundraiser to pay for some of the costs, but Del Bianco Prosthetics and Orthotics is doing the bulk of the work pro-bono.

"They don't have any insurance here in America obviously because they immigrated here to escape what was happening over there, so we wanted to help out as much as we could," said Owner Jim Del Bianco.

Staff is making a more modern version than the one Karikh left Ukraine wearing.

"(It's) that we would see here in America 30 years or more ago," said Del Bianco.

The family says the gift is priceless especially as Karikh has dreams of someday going back to his country.