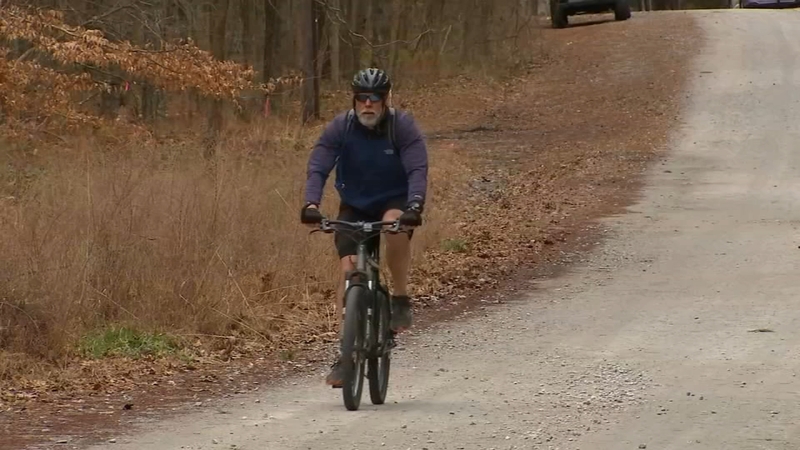 RALEIGH, N.C. (WTVD) -- Opponents of a second rock quarry near Umstead State Park applauded a decision Thursday released by the North Carolina Department of Environmental Quality, denying a permit to Wake Stone Corporation to develop and operate a quarry on the site.

"We think this is the right decision. It's the only good decision that (NCDEQ) could take," said Dr. Jean Spooner, Chair of the Umstead Coalition, a group that opposes the project.

In March 2019, Wake Stone Corporation entered into an agreement with the RDU Airport Authority Board of Directors, in which they would enter into a 25-year lease to build a rock quarry on the 105-acre Odd Fellows property, which is near Umstead State Park and the company's existing quarry just north of Interstate 40.

RDU Airport Authority estimated the lease to Wake Stone Corporation will bring in $24 million over 35 years. In addition, the company must provide $3.6 million for a third party to lease 151 acres of airport land to create a mountain biking recreation area.

"We're making a compromise," said Wake Stone President Sam Bratton at the time. "These are concessions that we didn't plan on having to give in order to get this deal done."

However, opponents of the quarry continued to voice their displeasure, claiming it would have a net negative effect on the surrounding area.

"All that noise of blasting, explosions, hauling rocks, 25 feet from a state park," said Erv Portman, a former Wake County commissioner who opposes the quarry. Portman specified his work against the quarry is as a private citizen.

Thursday, the North Carolina Department of Environment Quality agreed, writing that "the proposed quarry is located and designed such that normal operation would have significantly adverse effects on the purposes of the Park through noise, visual, and traffic impacts," citing it was denied on the grounds of N.C.G.S. 74-51(d)(5), stating "that the operation will have a significantly adverse effect on the purposes of a publicly owned park, forest, or recreation area."

"The record is overwhelming that a crushed rock quarry next to a state park is illogical. It makes no sense," said Portman.

"If the public land is given away to private interests to be exploited, then that would set precedents for other private companies to start taking advantage of other public land in the area," added Hwa Huang, Chair of the Capital Group of North Carolina Sierra Club. The club released a statement on its website shortly after NCDEQ's decision.

Wake Stone has the right to appeal the denial, which they plan to do.

"We respectfully disagree with the N.C. Department of Environmental Quality's Division of Energy, Mineral and Land Resources' decision to deny Wake Stone's mining permit modification and will appeal the decision. Our excellent record of environmental stewardship and 40-year history of being a good neighbor to Umstead State Park with no adverse impact is evidence we can do the same on the Odd Fellows property," said a statement on behalf of Bratton. "As we await a decision by the Court, the Triangle Quarry will continue to operate and supply much-needed natural resources to support the strong economic growth we are experiencing in the Triangle Region."

ABC11 reached out to RDU to learn if the lease agreement with Wake Stone could potentially be impacted by the denial; a spokesperson referred all questions to Wake Stone and NCDEQ.

Last year, the I-Team covered a separate debate about a rock quarry operated by Wake Stone Corporate near Umstead Park in regards to a sunset clause.

"This current application is proposing to expand the current operation on their site in longevity and decrease of buffers, as well as a new pit. And we are opposed to both of those. We believe the public was promised and owed the 50-year sunset clause back and that an expanded and new quarry pit should not occur," Spooner said.

Back in 1981, when Wake Stone was initially granted a permit to mine on the land, one of the restrictions included a 50-year sunset clause, with the initial permit stating "If all quarryable stone is not removed, the right of the State to acquire the quarry site shall accrue at the end of 50 years from the date quarrying commences or 10 years after quarrying operation have ceased without having been resumed, whichever is sooner."