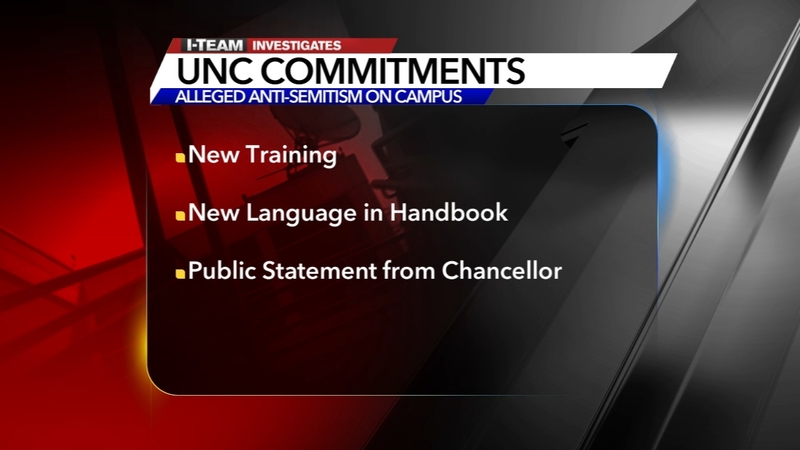 UNC reaches agreement with Dept. of Ed after Gaza conference

In a message addressed to the "Carolina Community," Guskiewicz said: "I reaffirm the University's commitment to creating a place where every member of our community feels safe and respected and can thrive in an environment free from anti-Semitism and all forms of discrimination and harassment."
"Simply put, the University does not tolerate acts of prohibited harassment based on age, color, disability, gender, gender expression or identity, national origin, race, religion, sex, sexual orientation, veteran status, or genetic information by University students, faculty, staff, and/or third parties in the University environment, including all academic, extracurricular, and University-sponsored programs or activities," Guskiewicz adds. "We're counting on every member of the community to uphold these policies to ensure everyone has an opportunity to learn, work and thrive at the University."

The direct communication from the Interim Chancellor to all students, faculty and staff is among the measures outlined in a Resolution Agreement between the University and the U.S. Department of Education. The agreement, signed October 14, was in response to a complaint filed with federal officials about the controversial conference on Gaza hosted by the UNC-Duke Consortium for Middle East Studies.

Rep. George Holding (R-North Carolina) first called for the investigation in April after the Consortium used federal funds to host the "Conflict Over Gaza" in March at UNC-Chapel Hill, and it was an event sponsored by more than two dozen university departments, plus the Rotary Club of Raleigh and other local organizations.

Many of those sponsors demanded their money back after video emerged showing a song with anti-Semitic language was performed by a Palestinian rapper.

"I hope we can all agree that it is irresponsible and immoral for taxpayer dollars to fund overtly biased advocacy under the guise of constructive academic discourse," Holding said in June.

The Department of Education threatened future Title VI grants to UNC in a letter on Aug. 29 unless UNC took action.

After that letter was sent, some academic freedom advocates argued the government could be setting a dangerous precedent if it injects politics into funding decisions. Some said they had never heard of the Education Department asserting control over such minute details of a program's offerings.

"Is the government now going to judge funding programs based on the opinions of instructors or the approach of each course?" said Henry Reichman, chairman of a committee on academic freedom for the American Association of University Professors. "The odor of right wing political correctness that comes through this definitely could have a chilling effect."

Jay Smith, a history professor at UNC and vice president of its chapter of the American Association of University Professors, said the letter amounted to "ideologically driven harassment." He said the Education Department official who signed the letter, Robert King, "should stay in his lane and allow the experts to determine what constitutes a 'full understanding' of the Middle East."

But Holding said it's clear the consortium stepped outside the bounds of the grant. The Education Department has an obligation to ensure its funding is used as intended, he said, adding that other schools should make sure they're following the rules.

UNC's Resolution Agreement, signed on October 14, also commits the University to do the following: