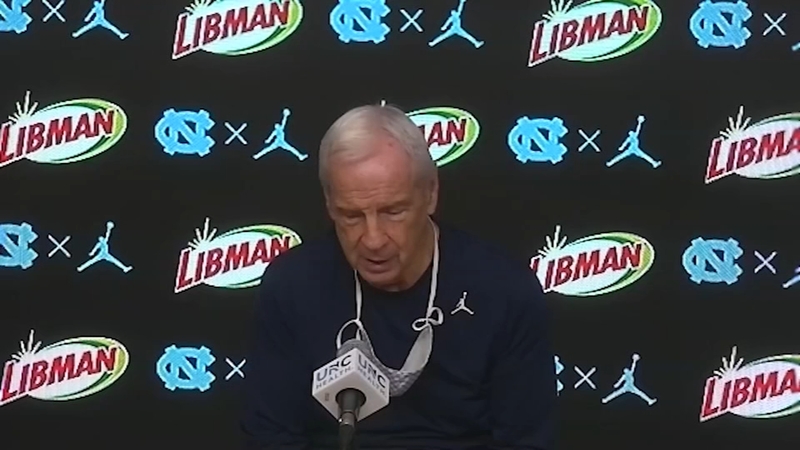 CHAPEL HILL, N.C. -- UNC basketball coach Roy Williams said the Tar Heels will be at full strength for their game this weekend at conference leader Virginia. That means that everyone is healthy and it also means that no one has been suspended for their participation in that maskless victory party last weekend that several players and managers put together.

Williams called it one of the most frustrating episodes of his coaching career but said that he has handled the issue internally.

"If you want to ask another question about what happened this weekend, then just forget it, because I'm not answering after this," Williams said Friday. "But it was not at a fraternity house. It was within our group of players and managers and a few, very few other people got involved."

North Carolina players and managers apologized for not following school and athletics COVID-19 guidelines tied to a celebration after a win at rival Duke.

On Tuesday, the university released a group statement by the players and managers, as well as a statement from Williams. Those statements came after a video emerged on social media of key players Armando Bacot and Day'Ron Sharpe mingling with multiple other people celebrating Saturday's win with no one wearing a mask.

"I was very upset about it," Williams added. "I'm still upset about it, but let's not make it out like we charged the Capitol building or anything like that. That's not what it was. It was not a free-standing party at some fraternity house or in the middle of Franklin Street, and I've handled it what I think is very appropriately.

That get-together forced the postponement of last Monday's scheduled game vs Miami at the Smith Center just hours before it was set to be played.

There's no word yet on whether they'll be able to make it up. Williams said he would like to if possible.

North Carolina's game at No. 9 Virginia figures to be a tough task whether the team is at full strength or not. The Cavaliers have won the past six games in the series and nine of the last 12 against the Tar Heels.

The tipoff is at 6 p.m. The game will be televised on ESPN.