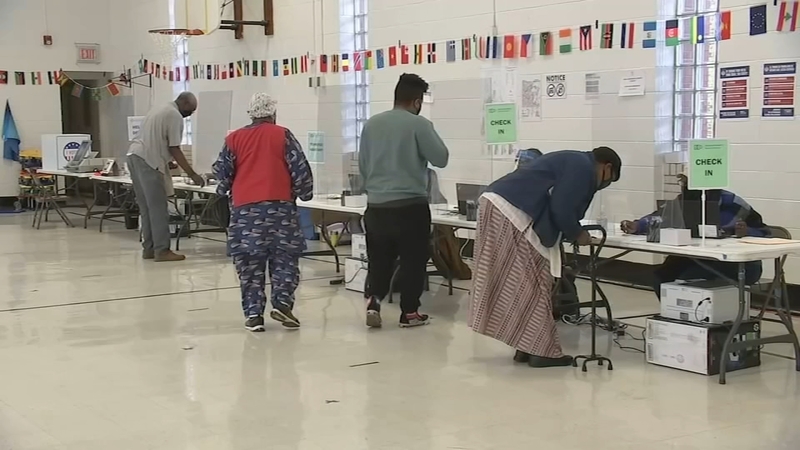 RALEIGH, N.C. (WTVD) -- Friday is the voter registration deadline in North Carolina for next month's primaries.

People can register to vote in several ways - in-person, online, or via mail. For people choosing to submit an application in the mail, it must be postmarked by Friday.

North Carolina does offer registration during early voting, which begins Thursday, April 28th. In that instance, you will need to provide proof of identification, which can include a Driver's License, government-issued ID, utility bill, bank statement or paycheck which includes the individual's name or address, or school-issued identification and proof of campus residence.

"You can also go to our website, look up your voter information, you can check your districts. The best part is you can look at your sample ballot. Before you ever go to the polls, you can look at your sample ballot, get an idea on who you want to vote for. You can even bring that sample ballot with you as a reference and that will help you out. It will actually speed up the time you actually take to go and vote," said Gary Sims, the Director of Wake County Board of Elections.

Thursday, volunteers participated in training at the county's elections headquarters in Raleigh to learn how to work at a polling location.

Elsewhere, volunteers with advocacy groups have worked to increase voter registration ahead of Friday's deadline.

"We got our team prepared and educated, updated them about the latest rules, the new forms that were available for us in our community, as well as working with our partners creating voter education," president of the Raleigh-Apex NAACP Gerald Givens Jr. said.

Givens said they are working to answer questions from potential voters about the process.

"Reminding them of early voting period, election day, as well as why local elections are important. How it affects citizens' everyday lives. Things from trash collection, how much affordable housing there will be, just about any issue you can think of," added Cheryl Tung, president of League of Women Voters of Wake County, who added the group has registered 289 new US citizens to vote since the beginning of the year.

Election turnout typically drops during midterms, though North Carolina does have a soon-to-be-vacant Senate seat up for grabs, which will likely increase attention. Tung said volunteers are working to highlight the importance of all races.

"We have really pushed up our efforts in a local elections matter campaign. Both last cycle and this cycle, we have distributed thousands of door hangers to residents. We're going to do one in Cary for 2,000 door hangers," Tung said.

The organizations are teaming up with North Carolina Asian-Americans Together to host a candidate forum at Christ the King Lutheran Church in Cary at 7:00 p.m., featuring Town Council candidates.

Elsewhere, Campus Vote Project has a presence on several campuses across the state to try and increase youth turnout.

"If you're not totally sure on how to navigate the system, it's going to prevent a lot of college students from voting. This year on May 17th, it also coincides with the end of school. For some places it's their Commencement Week, for others it's the week after school's already out. So just that amount of change, stress that comes with Finals, will drive down voter turnout," state coordinator with the non-partisan group Dr. Amanda LaRoche said.

"We've seen what happens when voters don't engage. And I think that younger voters are starting to see the importance of voting in things like the School Board races. We have Commission races throughout the state. There's Sheriff races. So things that tend to impact us more locally, students are starting to see how important that is," LaRoche said.

College students who are originally from out-of-state can vote in statewide elections as long as they are not registered to do so elsewhere. Seventeen-year-olds who will turn 18 by Election Day in November are eligible to participate in primaries.

North Carolina has open primaries, meaning unaffiliated voters, which make up the largest voting bloc in Wake County, are able to vote on either the Republican or Democratic ticket, but must choose one for all races. This means that you cannot choose to vote in the Republican primary for one election, but a Democratic primary for a different election. Casting ballots for either party will not change your official party registration.

This year's primaries were pushed back from March to May following legal challenges surrounding redistricting.