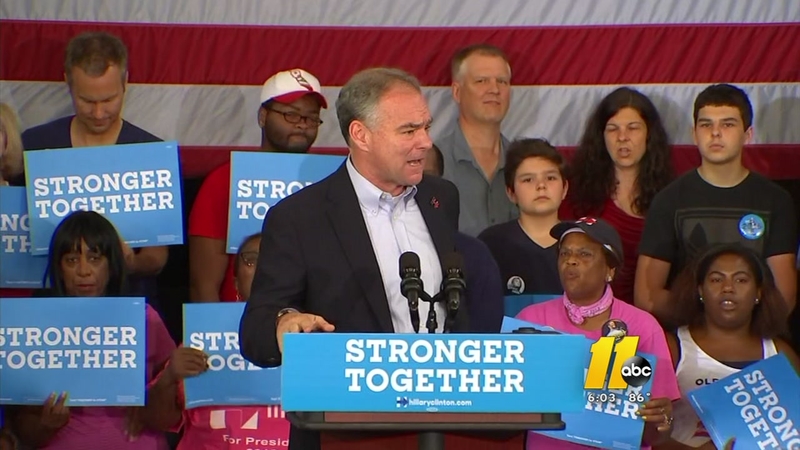 GREENSBORO, NC (WTVD) -- Democratic vice presidential candidate Sen. Tim Kaine made a stop in North Carolina Wednesday. He spoke to supporters in Greensboro with the goal of persuading voters that Hillary Clinton would boost jobs and the economy if elected president.

Kaine said Clinton has a detailed plan for adding jobs in America.

Kaine also talked of Clinton's plan to impose an exit tax on companies that ship jobs to other countries.

"We don't need a society where a company gets an incentive for taking a job overseas," said Kaine.

Kaine on Clinton's education plan: "It's easier to build a child than repair a person if you start young." pic.twitter.com/wQO01HEL16

The senator also caused for a raise in the minimum wage.

"We ought to value workers and treat them with dignity," he said.

"It's funny that Tim Kaine would come to North Carolina to promote Hillary Clinton's disastrous economic agenda, considering unemployment skyrocketed and he proposed $4 billion in tax increases while Governor of Virginia. It's clear Tim Kaine knows nothing about sound economic policies," said State Sen. Joyce Krawiec in a statement.

"Under GOP leadership, North Carolina has become home to the fastest growing economy in the nation, added more than 300,000 jobs, lowered unemployment in all 100 counties and implemented historic tax reform envied by current Virginia Governor and close friend of Hillary Clinton, Terry McAuliffe. Maybe Tim Kaine should take notes from Governor McCrory and the state legislature before promoting an economic agenda that Hillary Clinton doesn't even know how to fund," Krawiec added.

Kaine said Trump does not have a sensible plan for what he'd do if elected.

"Every time you get to the details, it's just 'believe me,'" said Kaine. "North Carolinians are not gullible people."

Kaine's been reaching out to southern voters this week. Most recently campaigning in Florida.

Pence will be in Raleigh on Thursday morning for a town hall meeting.

It's not just the VP's coming to North Carolina this week, Congressman David Price tells ABC11 that former President Bill Clinton will be in the state on Friday, but it's not clear where, yet.

The former president is expected to make many more campaign stops here between now and November on his wife's behalf.