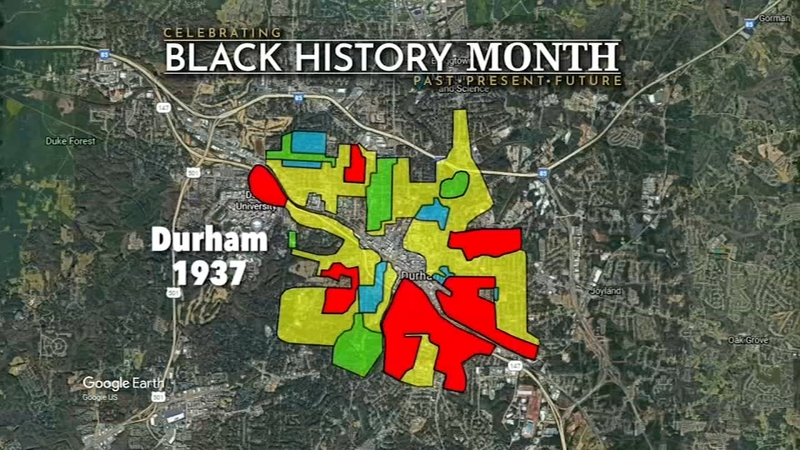 DURHAM, N.C. (WTVD) -- The lines of housing discrimination in the Triangle were often drawn in red. ABC11's month-long look at the past, present and future of Black history continues with an exploration of redlining and how the foundation of housing inequity was built here at home.

In Durham, part of that story can be told through ABC11 Anchor Joel Brown's very own family tree. To help tell the story of Durham's Walltown neighborhood, he drove there to see his cousins, Jackie Manns-Hill and Annie Smith Vample. All of them are descendants of Walltown's namesake, George Wall.

"This is your great great grandfather, George Wall and his second wife, Lily Wall," Manns-Hill said holding up a black and white photograph of Wall and his wife standing in front of his one-story wooden house with a brick chimney. "The original homeplace that he built on Onslow Street when he worked at Trinity College before it became Duke University."

Brown's great-great-grandfather, George Wall, was emancipated from slavery at 14 years old in Randolph County. He was soon hired as a servant for Braxton Craven, then-president of Trinity College where Wall would become a janitor.

When Trinity moved to Durham, later becoming Duke University -- George Wall came to Durham, too. Duke's loyal first custodian built a home for himself on a plot of wooded land, just north of what is now Duke's East Campus and still known as Walltown

"It was the first house in Walltown," Manns-Hill said. "He had to have someplace to stay, so the tale is, it was woods, a straight path, but he had to beat trees and everything down to make that path to build the house that he wanted."

As Duke grew, Durham boomed as the South's tobacco capital, and Walltown bloomed into a haven for working-class Black families.

"It was new and fresh. Lots were cheap I imagine," Manns-Hill said.

Smith Vample added, "And probably the most important thing was work was available."

George Wall died in 1930, just as the Great Depression took hold -- a financial catastrophe that set in motion a series of discriminatory public policies around homeownership that still resonate in Walltown, across Durham and dozens of American cities.

RELATED: Durham's Hayti community: A Black business mecca crushed by empty promises reckons with the past

With the housing market in freefall, President Franklin D. Roosevelt's administration created something called the Home Owners Loan Corporation as a way to refinance loans for longer periods and lower interest rates with mortgages backed by the federal government. But being approved for one of these loans often had everything to do with the race of the home buyer or the racial makeup of the neighborhood.

"What they did is they sent federal agents to 228 cities across the country, including Durham," said Mel Norton, a community engagement historian who helped facilitate Bull City 150. "They basically take a city map and draw lines around neighborhoods to determine which are risky and which aren't. And it was a color-coded system and the areas that were most risky were colored red, hence the term redlining."

Durham's majority Black neighborhoods like Walltown, Hayti or Old East Durham were all redlined -- making it harder for Black families to get home loans or build generational wealth.

Most of an American family's wealth is in their homes. It's the most common way for American families to build wealth. So Black families, whose homes were redlined or who were later not allowed to move into more favorable neighborhoods, were at a significant disadvantage when it came to building generational wealth.

In fact, decades after redlining, Black wealth in the U.S. is less than 10 cents on the dollar compared to White wealth.

"As a result of that, I think we can trace the wealth gap that exists in a place like Durham very directly to policies like redlining," said Robert Korstad, Duke University professor emeritus in public policy.

While Brown's cousins were children in Walltown at the time, they remember things a bit differently.

Smith Vample said, "We owned our house. In my growing up, I never moved!"

Brown's cousins' memories aren't wrong. Durham did have a stable Black middle class and strong Black-owned institutions like Mechanics and Farmers Bank or North Carolina Mutual who were willing and able to lend to Black people when many White institutions would not.

"So you had this ecosystem of Black institutions that supported Black homeownership opportunities and a range of opportunities across the community," Norton said.

But Durham's "Black Wall Street" was not equipped to combat the forces of government disinvestment from Black neighborhoods that kept Black home values down. Three of Durham's four trash incinerators were placed in Black communities. While parks, paved roads, and sewer lines were mostly-reserved for White neighborhoods.

New research from Korstad's students found that in the early 1930s, when Durham's Women's Garden Club convinced city planners to plant trees city-wide to create a natural canopy to offset the pollution emitted from nearby factories, Black neighborhoods were left out again.

All of it solidified the city's geography of where people lived and how they lived for a century.

Back in Walltown, the tide is turning in a new direction: newer, wealthier residents are frequently moving in.