Warning for homeowners: Home-protection device could actually cause a fire 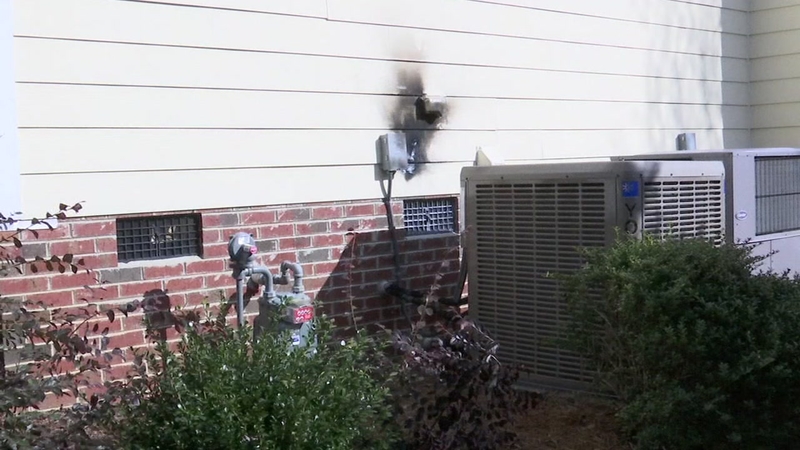 Outside surge protectors could cause fire threats

CARY, N.C. (WTVD) -- The Cary Fire Department is warning homeowners following the fifth fire connected to a surge protector in the town during the past four years.

"We started kind of seeing these types of fires that occurred, specifically one that had some significant damage to a home. A fire that traveled up the vinyl siding of a home, and then eventually into the attic space, and eventually into the roof," explained Cary FD Capt. Scott Benninghoff.

The two surge protectors are Supco Model SCM150 and Sycom Model SYC-120/240-T2, both of which are manufactured by Sycom Surge Inc. In July 2016. Underwriters Laboratories, a safety certification company, issued a warning where they described the surge protectors as "potentially dangerous" and "may pose a fire hazard."

"These surge protectors are predominately found on the outsides of homes near the air conditioning unit, and wired to the main shut-off," explained Benninghoff.

@TownofCary FD is warning homeowners to check their surge protectors, after responding to five separate fires over four years connected to two surge protectors deemed "potentially hazardous" by Underwriters Laboratories. What you need to know coming up at 6 on @ABC11_WTVD pic.twitter.com/VOfhJdde8X

In a statement on its website regarding concerns about the Sycom Model SYC-120/240-T2, Sycom Surge, Inc. wrote in part:

We have researched the situation and have come to the conclusion that grounding is the issue. There has been potentially hazardous situations only in applications without proper grounding. Grounding is of utmost importance when it comes to surge protection. A high resistance to ground in a surge event, no matter the manufacturer or the application, can cause heat to build up in the surge device. We can not stress how important it is that upon installation of any surge device the ground be checked for quality.

The most recent fire took place about 9 a.m. on Dec. 28 at a home on Billingrath Turn Lane. Judy DiDonato was preparing for a dinner party that night when she peeked outside.

"It looks like haze is coming off the grass but something smells funny. So I open the back door and with that, he ran out the front door and smelled it and went around the side of the house," DiDonato said, referring to her son who was there at the time.

He quickly asked for a fire extinguisher, and DiDonato called 911. Firefighters said the home's siding helped prevent the fire from spreading and causing more damage.

"Thank God (my son) was here because I wouldn't have been sitting in the kitchen had he not been here, and my husband is losing his eyesight. And if I hadn't been sitting at the kitchen, I don't know what would have happened," DiDonato said.

DiDonato has already filed a claim with her insurance company and was able to get back inside the home shortly after firefighters responded.

"I told all my neighbors. I just wanted everyone to be safe, and it's a scary thing. I was frightened, I'm sure," DiDonato said about sharing her family's story.

While the affected products are no longer being sold, Benninghoff is concerned for those that are already in use. The department is urging homeowners to check the make and model of their surge protector to ensure it is not one of the listed units.

"They're mounted on the side of the homes right near that main power shut-off, and if you find one and you have a question about one, contact a licensed electrician or your air-conditioning company. They should be aware of these products," Benninghoff said.

A Town of Cary spokesperson said the first reported incident was in July of 2015. There were two reported incidents in 2016 -- in June and July. Prior to the most recent fire, there was also a fire in April 2018.