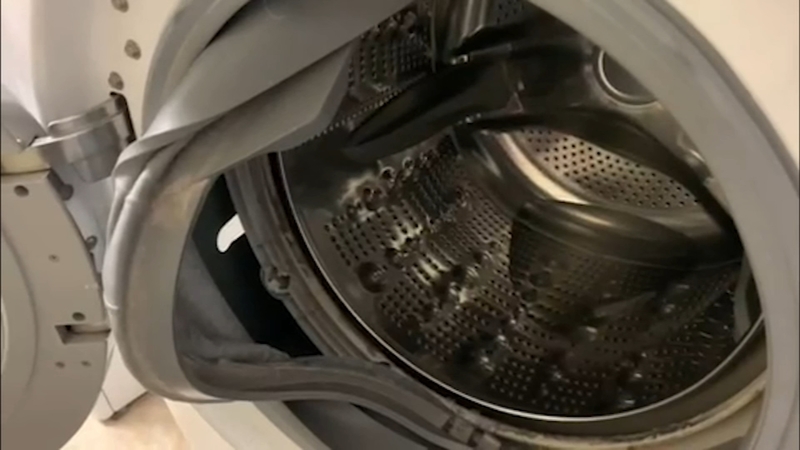 FAYETTEVILLE, N.C. (WTVD) -- A washing machine exploded in a Fayetteville woman's home, damaging her laundry room. Weeks later, she said the company that sold her the washing machine has not made it right.

"The amount of force that happened during the explosion projected it out from the wall," said Stacey Gillis after seeing her washing machine in a state of disarray. "The door blew open, the cover of the door blew off and landed on the floor."

Gillis describing the aftermath of her LG front-loading washing machine that came apart while she says she was just washing a queen mattress cover as she's done several times before without a problem.

After hearing a loud boom coming from her laundry room, she went in to see what happened and said she couldn't believe the state of her washing machine.

"The pedestal shelf blew out, and as you can see it projected so far off the wall, it's come out and it definitely cracked some tiles and some grout. You can see where the gasket basically ripped apart from the drum, and inside here you can see through this side where basically the amount of force ripped from it, just apart the actual frame from the cover itself," Gillis said.

WATCH: Woman shows damage to her washer right after the explosion

Gillis called LG right away to report what happened and a technician from LG was sent out the next day.

"He said it's probably not repairable," she said she was told.

She provided LG with the original invoice on her 2012 front-loading washing machine, along with other documents requested.

"It's been nearly two weeks, we still have the tangled-up washing machine because we haven't heard anything from LG," Gillis said. "I was very upset, disheartened and almost confused -- why they had acknowledged this was a product liability, why weren't they following up?"

Gillis got in touch with Troubleshooter Diane Wilson who got in touch with LG and a spokesperson provided this statement: "While LG does not disclose specific details of a customer's case out of respect for privacy, we can confirm that our customer service team has been working with Mrs. Gillis right from the start to assist. Although the claim is still being investigated to determine the cause and impact, LG is committed to our customers and is working in good faith to assist Mrs. Gillis with related damage and replacement needs. LG home appliances are enjoyed by tens of millions of Americans every day, and they are recognized by industry experts for their performance and reliability. It's worth noting that this model does not have any safety recalls and that we'll be working diligently with experts to assess the cause as consumer safety is always our top priority."

Gillis is still working with LG on a resolution and while she waits, she told Wilson, "Globally, millions of people use their appliances on a daily basis, without regards to their safety. I was fortunate; I occurred property damage. I'm concerned that the next time this occurs, it will be more than damage to floors and walls but physical harm. I can repair my property; a person cannot be replaced."