NC activists in orange call for an end to gun violence 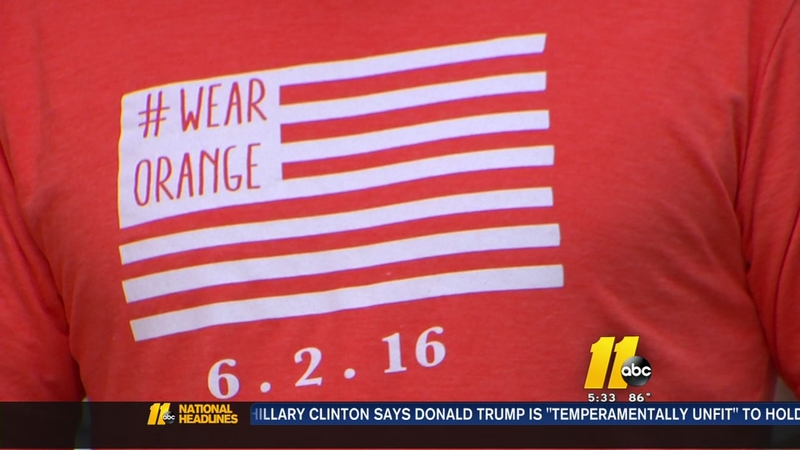 RALEIGH (WTVD) -- A nationwide movement to end gun violence made its way to the Triangle Thursday.

Members of the group North Carolinians Against Gun Violence wore orange shirts and handed out orange ribbons in what has also become known as "Wear Orange Day." The effort launched on June 2, 2015 when a group of classmates wore orange to honor their friend, Hadiya Pendleton.

Pendleton, a 15-year-old Chicago teen, was shot and killed in 2013. Her classmates started wearing orange because it's the color hunters wear to protect themselves.

Others shared their personal stories of loss and their motivation for keeping "gun violence prevention" in the national spotlight year-round. Effie Steel made her way from Durham to Raleigh to join the movement, citing her own personal tragedy.

She shared the story she's told time and again of her 21-year-old daughter, Ebony and unborn grandchild gunned down at the hands of the baby's father.

"I want to prevent any other family from experiencing the heartache and the longing I have for my daughter and grandson, Ebony and Elijah," Steel explained.

North Carolinians Against Gun Violence says everyday, more than 90 Americans are killed by gun violence. Between 2001 and 2010, the group says more than 11,000 people were killed in North Carolina by someone with a gun.

Sen. Floyd McKissick of Durham County says instances of gun violence at are an epidemic level. He criticized lawmakers for expanding the number of areas where "concealed handgun permit-holders" are allowed to carry.

"Why would you want to encourage [guns] on parks and in playgrounds?" McKissick questioned. "Why would we want to allow people at public universities to be able to carry these guns onto their grounds?"

Grass Roots North Carolina has led efforts to expand the number of areas in which concealed handgun permit-holders - who've proven themselves sane, sober and law-abiding - can protect themselves and their families. Each time we've expanded concealed carry - be it into parks, restaurants or educational property - gun control advocates have predicted horrific shootings. Each time, they have been wrong.

If those claiming to oppose "gun violence" really want to do so, they should join us in eliminating so-called "gun free" zones which actually attract criminals, sociopaths and terrorists who know they can kill with impunity.

Those choosing to wear orange on Thursday said their choice was not politically motivated.

"I actually don't care which side of the issues you're on," said Durham resident Nicole Barnes. "Saving lives is something I think everyone can rally around."