Heavy rain and flooding shuts down roads across the Triangle 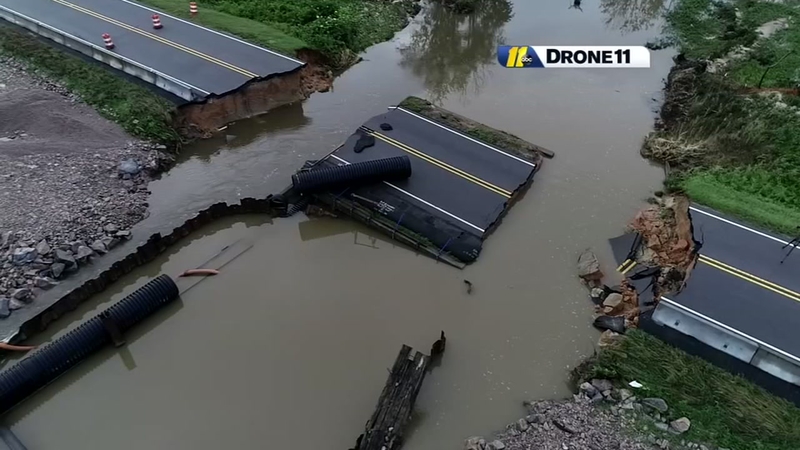 WAKE COUNTY, N.C. (WTVD) -- Multiple areas across the Triangle, including Wake Forest, Rolesville and Durham, have been experiencing flooding thanks to relentless rain.

One of the worst hit areas was Highway 401 near the Wake and Franklin county line. Multiple parts of the highway were washed away.

It happened in Franklin County near where Highway 401 and Highway 98 intersect. North Carolina Department of Transportation said the highway may not be fixed until August.

ABC11 will try to keep this list as current as possible. However, since roads reopen and close frequently during flooding, it's best to also keep an eye on the NCDOT's website.

Rain waters crushing through this section of hwy 96 near Martin rd. The NCDOT says they’re working around the clock to get this highway reopened. @ABC11_WTVD #abc12 pic.twitter.com/hFwGPip8lr

"The water found a way around the culvert here and it went over the top of the road and blew out the shoulder and took the asphalt with it," said Jason Dunigan, a Wake County maintenance engineer.

Part of 96 was also damaged in Franklin County.

More on flood-caused closure of US 401 near NC 98 in Youngsville. Expect lengthy closure. SB drivers detouring onto Tarboro Road to NC 96 South back to 401 South. NB drivers go opposite way.

NC 96 is closed in both directions in Zebulon.

The Wake Forest Police Department has closed down Rogers Road at Hobblebush Way following extensive flooding in the area.

A woman got stuck in floodwaters in that area earlier in the day. She said she came around the curve and the waters took her car into a ditch. She was saved by a good Samaritan.

Louisburg Road, Hill Road and Moores Pond Road are closed in both directions.

RELATED: 2-3 inches of rain possible throughout the weekend as storms move across Triangle

Real time traffic updates for Raleigh and nearby towns can be viewed here.

The Rolesville Fire Department has also warned residents to stay away from a collapsed section of Mitchell Mill Road.

Durham officials closed the intersection of Roxboro Rd at Fairfield because of high water.

According to Duke Today, the Bryan Center has been shut down, as access has been hindered by flood waters.

NC 96 is under water at Perry Creek near Zebulon.

Forestville Road near Creekside Drive is closed and will remain closed while crews evaluate damage.

While the focal point of the heaviest rain may be located in the mountains, where local amounts of up to six inches may fall between now and tomorrow night, the Triangle is still expected to get a thorough soaking over the next few days.

Most of the numerical forecast models are implying that Raleigh should pick up between 2 and 2.5 inches of rain this weekend, which can cause flooding of both low-lying and poor drainage areas.

If you come across a flooded road and you cannot see the pavement, do not drive through it.