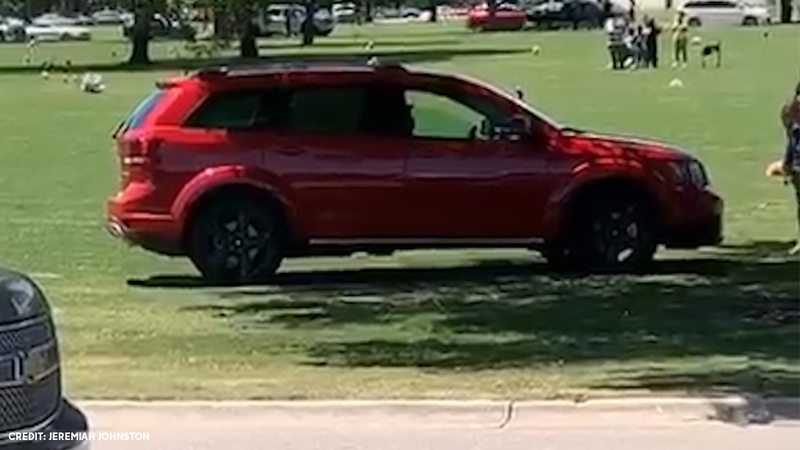 HOUSTON -- Amanda Hill and her family went to the Houston National Cemetery on Sunday to watch the Lone Star Flight Museum flyover, commemorating the 75th anniversary of the end of World War ll in Europe.

They planned to watch it standing near the grave of her grandparents, Robert Eugene Marsh and his wife, Ruth, who were laid to rest in the cemetery.

Marsh was a First Lieutenant in the Air Force, in a division known as the Bloody Hundred, which did bombing runs over Germany.

For them, and many other people who were at the cemetery, it was a tribute to the veterans and a chance to visit the graves of loved ones.

Instead, some people were witness to a bizarre incident that outraged the Hill family.

Amanda said a woman driving a red minivan was in a hurry to leave as soon as the flyover ended.

"She tried to back up, and then went up on the curb of the section where my grandparents are buried," Hill said. "[The woman] couldn't get around some cars, and then she started running over the graves."

Hill said in all, the driver tried to get around the traffic jam three times.

"She went over dozens of graves by the time she finished."

By then, onlookers were yelling at her to stop, and 19-year-old Jeremiah Johnston was recording it on his cell phone.

Hill said the driver's window was down.

"She heard us yelling at her to stop, and just kept doing it. My mother approached the van, and the driver told her she had to get out."

"This is so disrespectful," is heard being said by a witness.

When the van was heading toward the grave of Lt. Marsh, his family drew a line in the sand, so to speak, and tried to block the woman from going farther.

"My mom stood in front of the van, and finally had to jump out of the way, because she was going to hit her," said Hill.

It did, however, spare Marsh's grave marker from being run over.

The woman finally got out of the cemetery, but not before being caught on video.

"She knew she was being photographed, but she didn't care," Hill said. "I was talking to my parents earlier and said, 'I don't want this to be a huge deal and reflect negatively,' and my mom said, 'No. Your grandfather would be proud of you for making sure this woman gets justice, because they would be appalled.'"

"I felt bad for the families whose loved ones' graves were run over," Hill added. "It's so disrespectful and especially on a day when we're honoring veterans of World War ll."

The woman behind the wheel has not been identified at this time, officials said.