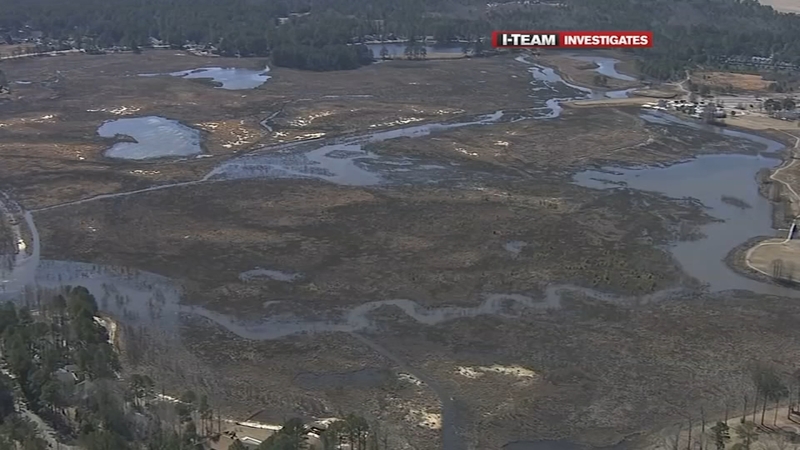 The Woodlake Country Club property, which includes the subdivision, golf courses, dam and hundreds of undeveloped lots, will be owned for the first time by a North Carolina businessman after a foreclosure auction.

"I don't know that it's personal, but it's frustrating," Keith Allison, a Fayetteville native, Woodlake property owner, and CEO of Systel Equipment told ABC11 about his $3.5 million bid. "There has been no interest by ownership for 40 years. We should be able to do well now while we do good. There's a lot of potential in the Woodlake community."

Allison had earlier bought the mortgage to the property; the former ownership group, led by German-investor Ilya Steiner, had also failed to pay property taxes since at least 2014.

"I expect $70 (million) to $80 million over the next five years and hundreds of jobs created by opening Woodlake for development," Allison said. "I've been talking to developers out of Florida that work with the PGA, and I've been talking with a tour professional who wants to come here and teach. To have a dam here, it's in the best interests of the residents, but I think you'll see a lot of development."

Allison's leadership is certainly being welcomed by the residents at Woodlake, who embarked on their own legal battles with the previous ownership.

A SORDID SAGA OF NEGLECT

A Moore County judge awarded residents $161 million from the maligned owners of the Woodlake Dam in 2018 and found them liable for being either unwilling or incapable of fixing the dam that nearly breached during Hurricane Matthew.

The multi-million-dollar penalty was handed down without anyone from the defendant, Woodlake CC Corp., in attendance. The judgment is the latest chapter in a years-long saga of mismanagement and negligence on the part of Woodlake, and lax enforcement from state regulators.

According to the judgment, $23.7 million is awarded in compensatory damages to those who own waterfront properties, and $16.9 million to non-waterfront. Citing negligence, the judge ordered $129 million in punitive damages.

Property values have plummeted, as has the population of fish, frogs, flora, fauna and many species of birds that depended on the lake for their habitat.

PROMISES MADE, PROMISES NOT KEPT

At first, state officials hoped their own lawsuit in March 2017 could coax Woodlake to move on repairing the dam. Under the terms, Woodlake had until April 10 (25 days from March 15 to share with the NC Department of Environmental Quality firm engineering plans to build a temporary breach in the dam.

Officials conceded this would not permanently fix the dam, but it would have negated any danger should there be another major rain event in the near future. Construction on those was to begin within 60 days and be completed within 105 days - just in time for hurricane season.

With that last deadline approaching, it became increasingly clear that Woodlake would not comply. DEQ officials confirmed to the ABC11 I-Team that Schanbel Engineering pulled its representative from the project as the firm waited for Woodlake CC Corp. to pay up. A manager at Crowder Construction added that Woodlake had not yet executed a contract offered weeks earlier.

The ABC11 I-Team also found Woodlake in deep debt to Geosyntec Engineering, owing close to $270,000. According to the Moore County Tax Collector, Steiner and Woodlake Corp. Vice President Julie Watson were also well behind on payments.

Last summer, officials at the Attorney General's Office and Department of Environmental Quality effectively labeled the situation at Woodlake to be that of an emergency, requiring immediate action that must be paid by taxpayers.

"Breaching the dam is a measure essential to provide emergency protection to protect life and property downstream," NCDEQ Secretary Michael Regan wrote in a letter dated June 8, 2017. "Under this declaration, the Department intends to expedite the procurement of qualified dam engineers for the design and construction oversight for the temporary full breach of the damaged Woodlake Dam."

Watson refused to speak to ABC11 on camera but vowed to welcome us to Woodlake in the future (we've never met her despite several previous calls and visits before). She told the court that Steiner, her business partner and financier, visited North Carolina, and is the one responsible for sending the money needed to pay for dam repairs.

A MATTER OF PUBLIC SAFETY

Like before, however, those repairs never happened, and contractors were never paid, and it was taxpayers who were on the hook for at least $1.5 million.

Despite the potential for good news now, the saga is also a warning to communities across North Carolina: Woodlake is one of more than 2,200 privately-owned and maintained dams in North Carolina (there are more than 6,000 total). Some dams are much larger than others, but they all hold a significant amount of water and could pose significant dangers if they were to ever give way.