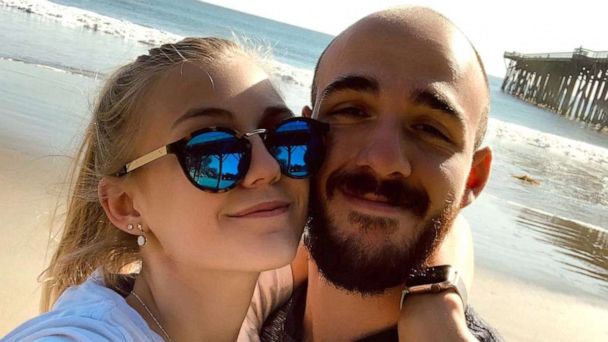 A Wyoming coroner on Tuesday said Gabby Petito, the 22-year-old travel blogger whose remains were recovered in September in a national park, died by strangulation.

Petito's boyfriend and cross-country traveling companion, Brian Laundrie, has been named by investigators as a person of interest in her death and is the subject of a massive nationwide search being directed by the FBI.

Blue described conducting a "detailed investigation" with the assistance of the FBI that included a full-body computed tomography scan and examinations by a forensic pathologist and a forensic anthropologist.

"We hereby find the cause of death by strangulation and manner is homicide," Blue said.

Petito's body was discovered on Sept. 19 in the Bridger-Teton National Forest near Jackson.

Blue said the autopsy determined that Petito's body had been exposed to the wilderness for three to four weeks. He did not release an exact day investigators believe Petito was killed.

Blue said that Wyoming statutes limit the amount of information he is allowed to make public about the autopsy.

He did say Petito was not pregnant at the time of her death.


Blue declined to answer when asked if he suspects Laundrie is responsible for Petito's homicide, saying that will be up to law enforcement to determine.

"Nothing is obvious in a situation like this, so detailed analysis was used both to determine manner and cause of death," Blue added.

Blue's announcement comes amidst a nationwide search the FBI is leading for Laundrie, who drew suspicion after returning to his parents' North Port, Florida, home on Sept. 1 without Petito but driving her van, authorities said.

Blue said the case has been "quite the media circus, and continues to be."

"Unfortunately, this is only one of many deaths around the country of people who are involved in domestic violence, and it's unfortunate that these other deaths did not get as much coverage as this one," Blue said. "I'm assuming, because the deceased was a blogger, that this received more coverage than others but there are a lot of both men and women who have lost their lives that aren't covered with this kind of media attention."
Report a correction or typo
Related topics:
abc newsnational
Copyright © 2021 ABC News Internet Ventures.
TOP STORIES
Duke head football coach David Cutcliffe will not return next season
NC family abroad stuck in limbo as travel restrictions implemented
Vaccine inequity, hesitancy made omicron more likely: Scientists
For cop who shot Daunte Wright, will 'wrong gun' plea work?
RDU airport estimates 44,000 passengers on busiest day this week
FL teen may have been taken to NC by person she met playing video game
Show More
Fire at Pilot Mountain closes state park, burns 180 acres
Morrisville man missing for more than 2 weeks found safe at home
Arbery, Rittenhouse cases spotlight self-defense and vigilantism
Streets of Southpoint reopens Saturday after shooting that injured 3
Supreme Court set to take up all-or-nothing abortion fight
More TOP STORIES News