Where will NC players go in the NBA draft? 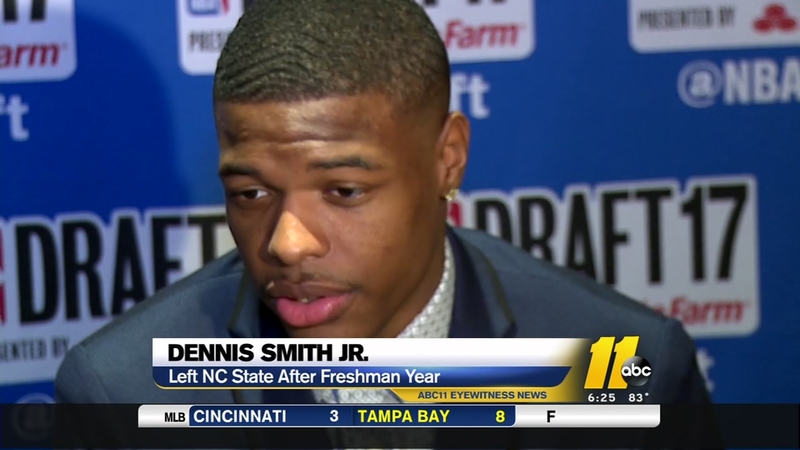 It's almost time for the 2017 NBA Draft, and as no surprise, a few top prospective draftees are coming from D-1 schools in North Carolina.

On Chad Ford's Top 100 Draft Prospects list for 2017 on our sister site ESPN, we zoom into our local players ranked in the top 20 prospects.

Tatum is ranked No. 4 on the list and is a projected top 5 pick.

Tatum played only his freshman season at Duke and now looks to turn pro as a potential lottery draft pick. Tatum averaged 16.8 points a game, while totaling 488 points for the season for the Blue Devils.

A notable trait for Tatum, who is listed at 6-8, is that he has a nearly 7-foot wingspan. He is vastly skilled offensively, and can shoot 3s (34.2% at Duke) as well as drive and pass. He's an excellent free-throw shooter (84.9%)

"Jayson is one of the most gifted offensive players I've ever seen," said Jeff Capel, Duke associate head coach. "He has such an advanced repertoire with his shot-making and footwork."

PROJECTED DRAFT SPOT: Fourth pick of the first round, to the Phoenix Suns

Giles, a freshman like Tatum, played just one year at Duke, with only a fraction of Tatum's impact. He was ranked No. 12 overall on Ford's list.

Giles, who was the nation's top player coming out of high school, has battled recurring injuries that have slowed his development.

The 6-11 Giles did flash a bit of his talent during athletic testing at the NBA combine.

WEAKNESSES: For Giles, perhaps the biggest challenge is staying healthy.

PROJECTED DRAFT SPOT: 14th pick of the first round, to the Miami Heat, or perhaps 15th overall, to the Portland Trail Blazers.

Kennard, ranked No. 15 on Ford's list, blossomed as a sophomore at Duke, leading the team with 19.5 points per game. Kennard showed an ability to hit clutch shots and has deep range and toughness.

WEAKNESSES: Kennard chose not to participate in the combine, leaving a few scouts understandably disappointed. The verdict remains out whether this will hurt his draft stock.

PROJECTED DRAFT SPOT: As high as No. 12 overall, to the Detroit Pistons. It's possible Kennard could drop a few spots, but he should go in the Top 20.

Ford has Smith listed as the No. 7 prospect on his list, and with good reason.

The ACC freshman of the year, averaged 18.1 points per game in his lone season for the Wolfpack

He also averaged 6.2 assists and nearly two steals per game.

With his explosive ability to take defenders off the ball, get into the paint, and elevation, Smith could be a game-changing guard.

WEAKNESSES: Smith seems recovered from the knee injury that cost the Fayetteville native his senior year of high school. Nevertheless, he still has plenty to work on. His long-range shooting is sometimes streaky, and despite being an opportunistic defender, sometimes seemed to take plays off, something that won't fly at the elite level. He must improve his turnover ratio and free-throw shooting.

PROJECTED DRAFT SPOT: No. 9 overall, to the Dallas Mavericks. Some rumors say Smith has caught the eye of the Orlando Magic, who could take him at No. 6.

Collins, ranked No. 16 in Ford's list, was one of the best breakout stories of the college season.

Collins, a 6-10 sophomore, produced solid testing numbers in the combine. Collins' top key shooting percentage totaled out to 100%, while his corner right and corner left shooting percentage were 80%. All and all, Collins is a versatile player with solid, if not spectacular scoring abilities.

Collins, who averaged just 7.3 points per game as a freshman, exploded in his second year at Wake Forest, pacing the team with 19.2 points per game in just over 26 minutes per game of action. A solid shooter (62.2% from the floor), Collins is also a stalwart rebounder, plucking nearly 10 per game for the Deacs.

WEAKNESSES: Collins knows his role. He isn't a 3-point threat at all, in fact, he didn't even attempt one in his college career. There aren't a lot of glaring weaknesses in his game. Interior defense will be a focus.

PROJECTED DRAFT SPOT: No. 16 overall, to the Chicago Bulls, or perhaps a spot higher, to the Trail Blazers.

WHAT ABOUT THE TAR HEELS?

Chief among them is Justin Jackson, the Tar Heel who most appears NBA-ready. Some mocks have Jackson going as high as No. 13 overall, to the Denver Nuggets.

Though Ford doesn't rank Jackson in the Top 20, some mock drafts have him going as high as 14th overall.

Jackson "historically has not been a good 3-point shooter," Ford said. "The one thing you like about Justin Jackson, a high basketball IQ, he's got a killer floater, a great mid-range game, maybe the best mid-range game in the draft."

Another Tar Heel who will likely hear his name called is Tony Bradley. The big man entered the draft after just one season in Chapel Hill and is projected to be a late first-rounder, if not a second-round pick. His long-term upside is generally regarded as higher than Jackson's.

Be sure to tune in to the draft Thursday at 7 p.m. on ESPN or the Watch ESPN app. And follow ABC11's Joe Mazur on social media. He'll be in New York for the draft, bringing you inside looks and breaking developments.