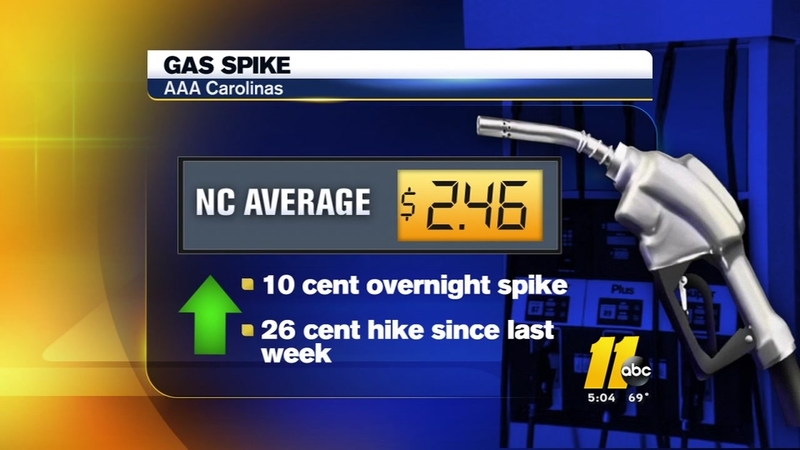 RALEIGH, North Carolina (WTVD) -- Gas prices continue to rise across our area. The average price of a gallon of gas climbed to $2.44 over the course of just days.

Last week, Gov. Roy Cooper issued of State of Emergency to temporarily waive the cap on maximum hours of service restrictions for fuel vehicles traveling in and through North Carolina.

The order will help gasoline move in and through the state more easily and quickly in response to delivery problems caused by Hurricane Harvey.

"Hurricane Harvey's damage to refineries in Texas and Louisiana could ripple throughout the southeast, causing gasoline shortages and rising prices," said Cooper in a news release. "I'm taking action to make it easier to get gasoline into our state so North Carolinians who need gas can get it."

Colonial Pipeline said that its pipelines 1 and 2 continue to operate from Lake Charles to the East Coast, but deliveries will be "intermittent and dependent on terminal and refinery supply."

The lines remain down from Houston to the Hebert Injection Station, which is out of service. That station is between Beaumont, Texas, and the Louisiana border.

Some gas stations in the Triangle are already feeling the squeeze and were out of gas Friday morning.

Gas station at Research Drive and Erwin Road in Durham

The Georgia-based company said it estimates that it will be able to return to service from Houston on Monday, following an evaluation of infrastructure and "successful execution of our start up plan."

The pipeline, a crucial artery in the nation's fuel supply network, provides nearly 40 percent of the South's gasoline.

Incredible...Look at the hike within 3-and-a-half hrs at this South Saunders @CircleKStores! I took 1st picture at noon, 2nd just now #ABC11 pic.twitter.com/MTaQNHtlQo

"When you have a situation like this, the problems go all up and down the pipeline," Cooper said. "We've seen this happen before with problems with Katrina ... We've already asked the federal government for certain waivers in order to be able to provide as much supply here as possible. We're looking at declaring a state of emergency in order to be able to deal with this issue."

Folks in the Triangle are already seeing a price increase. They've been traveling from town-to-town and to different gas stations to find the best prices.

Stein said the NC Department of Justice will be reviewing complaints from consumers about excessively high fuel prices.

"If you see suspiciously high gas prices, it could mean that gas stations are taking advantage of their customers," Stein said. "I want to know about it. My top priority is protecting North Carolinians - including their wallets. Taking advantage of people during a weather crisis would be unacceptable, and I will hold any offenders accountable."

AAA Carolinas tells ABC11 the statewide average for a gas of regular right now is $2.36, which is up 17 cents from before Hurricane Harvey hit.

"It's a little unnerving seeing the prices jump up so much so quickly," said Erica Jackson. "I drive a good amount every day so that's not very comforting."

AAA is urging drivers not to panic and over-consume. An official is concerned people might feel the need to pulled over and top off their tank, which could lead to a shortage and long lines at gas stations like we saw in 2016.

In September of 2016, a leak and gas spill in Alabama that closed the Colonial Pipeline led to days of empty gas station pumps and higher prices in Alabama, Georgia, Tennessee, and the Carolinas.

Big gas line at the Costco in Apex. @ABC11_WTVD pic.twitter.com/5O1BJQHt1R

Gasoline prices have been on the rise even before the pipeline shutdown. Harvey's devastating strike on the Gulf Coast has prompted one of the summer's largest one-week price surges, AAA reported.

Among the reasons: About one-quarter of the Gulf Coast's oil refining capacity was taken offline, according to the Oil Price Information Service.

The storm also prompted at least eight Texas refineries to shut down, according to AAA. Nearly one-third of the nation's refining capacity is along the Gulf Coast from Corpus Christi, Texas, to the Lake Charles area.

The Colonial Pipeline runs from the Houston area to the New York harbor and includes more than 5,500 miles of pipeline, most of it underground.