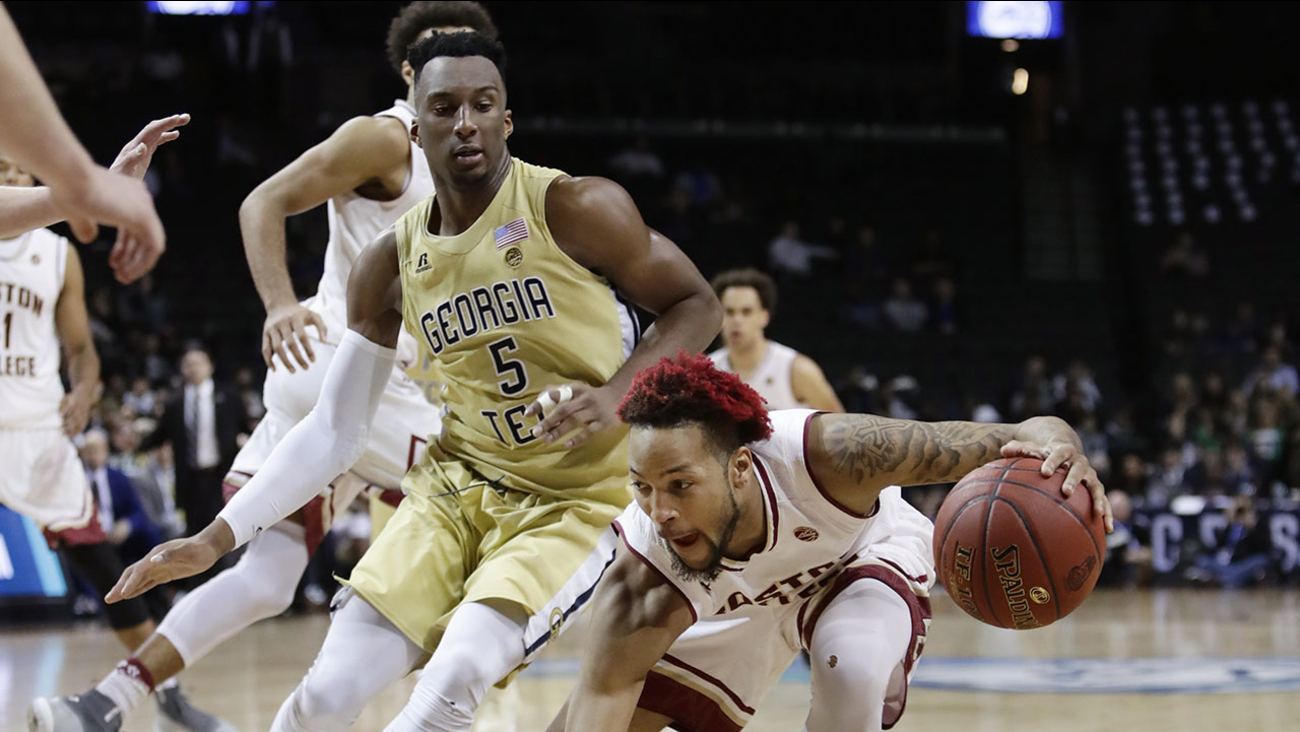 NEW YORK -- Following its first winning season in seven years, Boston College has a chance to make some noise in March.

Ky Bowman had 26 points, 10 rebounds and six assists to lead the Eagles over Georgia Tech 87-77 on Tuesday in the opening game of the Atlantic Coast Conference Tournament.

Sophomore forward Nik Popovic scored a career-high 20 points and Raleigh's own Jerome Robinson, runner-up for ACC player of the year, added 19 for Boston College. Despite going 2 for 14 from 3-point range, the Eagles never trailed and were in control throughout against a banged-up Georgia Tech team that struggled to score all season.

With the win over Georgia Tech, Ky Bowman and the Eagles will face @PackMensBball tomorrow at 2 p.m. #ABC11 @ABC11_WTVD pic.twitter.com/tySXLHNscI

With the league holding its postseason showcase in Brooklyn for the second consecutive year, a sparse crowd was on hand to see the 12th-seeded Eagles (18-14) advance.

"My preparation probably begins in about 20 seconds," BC coach Jim Christian said. "But this is an important time to enjoy. I want these guys to enjoy it, and then we'll start getting ready right away."

Tadric Jackson scored 23 of his 29 points in the second half for the 13th-seeded Yellow Jackets (13-19), who won their final two regular-season games after losing seven straight and 11 of 12.

Wake Forest guard Bryant Crawford (13) strips the ball from Syracuse center Paschal Chukwu (13) during the first half of their ACC Tournament game on Tuesday.

Syracuse had all five starters in double figures in the night game Tuesday, beating Wake Forest, 73-64.

The 11th-seeded Orange (20-12) jumped out to a big lead early and withstood all efforts by the Demon Deacons, who rallied several times but could not overcome the deficit.

Syracuse advances to play No. 6 seed North Carolina next. Tipoff is set for 9 p.m. Wednesday.

Tyus Battle had 18 points and Paschal Chukwu added 14 points and nine rebounds for Syracuse, which is hoping an impressive performance in Brooklyn will get them off the bubble and into the NCAA tournament after a one-year absence.

"We're confident against anyone we play. I don't care who it is. We hung in there with some of the best teams in the country, and when we're on the floor 1-on-1 with them, we're confident we're going to come out with the win," Battle said.

Bryant Crawford scored 22 points for No. 14 seed Wake Forest (11-20). Normally dangerous from long range, the Demon Deacons went 6 for 29 (20.7 percent) on 3-pointers against Syracuse's signature 2-3 zone and never led in the game.

Playing in its home state, Syracuse had the benefit of partisan support on a neutral court, with many of its chanting fans in a crowd of 10,612 decked out in orange.

Bonzie Colson arrived at the Atlantic Coast Conference Tournament ready to play as much as Notre Dame needs him this week in Brooklyn. The broken left foot that cost him 15 games this season is no longer an issue.

The Fighting Irish needed Colson more than expected Tuesday against a Pittsburgh team that finished 0-19 against ACC opponents.

Colson scored 19 points in 33 minutes and Notre Dame held off Pitt 67-64 in its tournament opener.

Notre Dame coach Mike Brey, who earned his 500th career victory, said there are no restrictions on Colson.

"No, he's ready to roll," Brey said. "Hey, I'm going to get my money's worth out of his eligibility."