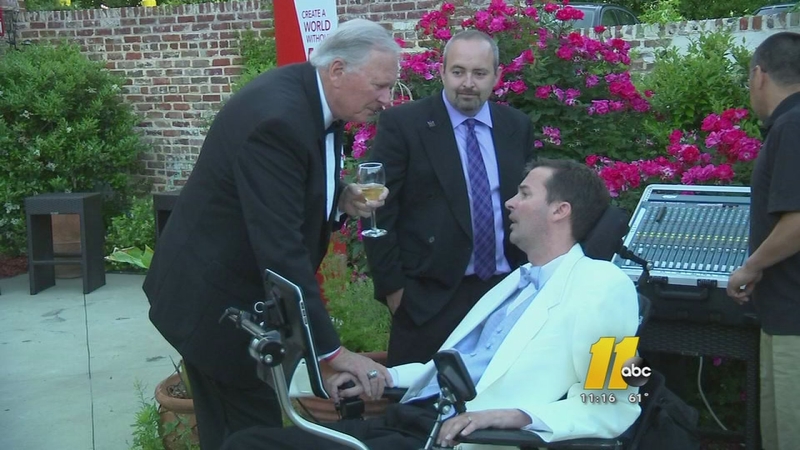 RALEIGH (WTVD) -- A man very close to all of us at ABC11 received a very special honor Wednesday night.

Since leaving the anchor desk, Larry Stogner has been working tirelessly to help find new treatments and a cure for ALS.

Wednesday night, Larry and Chris Rosati were honored for their efforts during the City of Oaks and Hope Gala at Babylon restaurant in downtown Raleigh.

ABC11's Barbara Gibbs served as mistress of ceremonies at the event.

Larry has been shining a light ever since he retired in February following his own diagnoses. Earlier this week, he was lobbying lawmakers on Capitol Hill.

"So many people know me and know my story and all of a sudden those folks who are saying, 'ALS I've heard of that. I know what it is.'"
"We wanted to do something very special to promote the whole concept," said event co-chair Shervin Tahssili.

That concept was a black tie event featuring food, music, a silent auction and admission packages ranging from $150 to $5,000. All proceeds went to ALS research.

"What a wonderful opportunity to have Larry Stogner here and Chris Rosati here because both of them are very prominent faces of ALS in our city," said event co-chair Tim Chalmers.

Rosati, who was diagnosed in 2010, has put his energies into inspiring others. He challenged everyone involved in the fight -- including the ABC11 family -- to help find a cure in six years.

"What we're doing is we're wanting to bring a voice to them and to bring recognition to the fight that they're put through," said Chalmers.

The Jim "Catfish" Hunter Chapter of the ALS Foundation hopes to make this an annual occasion. They're planning a similar event this fall in Chapel Hill.