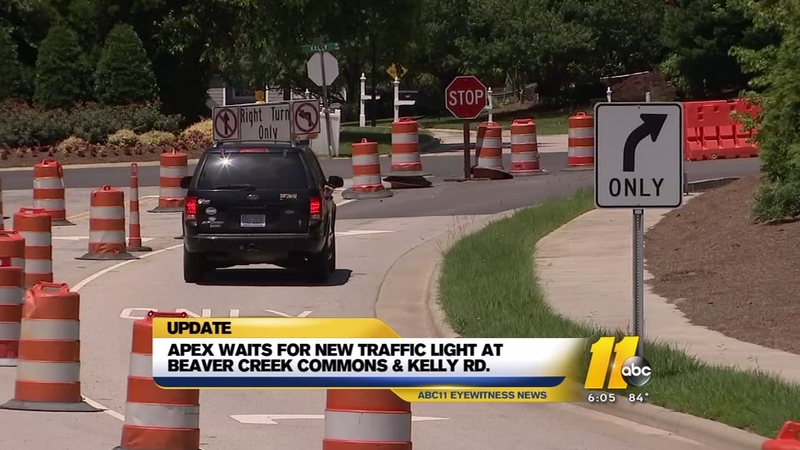 APEX, NC (WTVD) -- The site plan is ready and so are the permits, but the lengthy process of acquiring property is putting the brakes on the promised construction of a new traffic light in Apex.

According to town officials, developer Beazer Homes is working with homeowners in the Abbington development to purchase land to install signal poles at the Kelly Road-Beaver Creek Commons Drive intersection.

Though the North Carolina Department of Transportation has already approved the plans, officials explained there are certain legal hurdles to sell/buy land, including assessing valuations and adjusting mortgages.

That means residents must continue to deal with a temporary barricade preventing left turns and U-turns.

"How many more accidents do we need before something is done," neighbor Mary Miskomen lamented to ABC11. "When you're making an illegal U-turn, you just hope nobody sees you. If you run a red you know you really run the risk of hitting somebody."

Apex Police began enforcing the new rules of the road April 4 after residents raised safety concerns; officers reported 10 crashes at the intersection from January 2017 until the barricades were installed.

At first, police set up cones and a big sign, but that didn't appear to stop anyone; officers issued citations at a furious pace weeks after the transition. In the latest crime analysis, police report at least 181 tickets for illegal turns since April 1.