Some Nissan Rogue drivers say cars brake for no reason 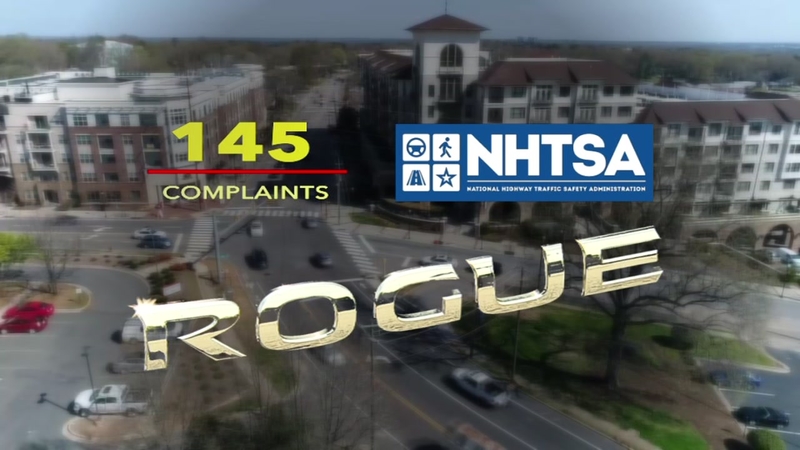 ZEBULON, N.C. (WTVD) -- New cars are now equipped with the latest technology that's supposed to help you on the roadways and prevent crashes, but a Zebulon woman says it's that new technology that's putting her at risk.

"The car just hit the brakes hard, pretty much put me to a stop. I had no one in front of me, behind me and it just did it," Cindy Walsh said.

Cindy is talking about the Automated Emergency Braking System in her 2018 Nissan Rogue that's supposed to help prevent accidents when a driver becomes too close to the car in front of them.

In February, Cindy says the system activated while she was driving along Airport Blvd. in Raleigh for no reason.

"I was going 55, and all of a sudden a little light flashed in the dashboard and the car just hit the brakes hard. It braked so hard that if someone would have been behind me, it would have really hurt," she added.

Cindy took it to the dealership - who confirmed the car's sensors did not work correctly.

How the Nissan braking system is supposed to work

2017 and 2018 Nissan Rogues have sensors that use radar to detect other vehicles approaching. The technology is supposed to prevent accidents by alerting the driver that a car is dangerously close. The system can apply the automatic emergency braking system to avoid an accident.

When it comes to Cindy's car, the dealership recalibrated the car's sensors and performed a software update and told her the problem was fixed.

Fast forward to the week of July 8th and Cindy says it happened again.

"I was getting up speed to get on a major highway and the same thing - the alarm went off and the car braked," Cindy said.

Cindy went right back to the dealership and another software update was done.

"They said it was good at this time but can't tell me that it won't happen again."

Chris Sellers tells me the same thing is happening to his 2018 Nissan Rogue. He says he's called the dealership but says it told him he'd have to pay for them to look at his vehicle since it's outside of the warranty period.

Cindy and Chris are not alone. We found 145 documented complaints filed with the National Highway Traffic Safety Administration for 2017 and 2018 Nissan Rogues suddenly stopping in traffic.

Those complaints may or may not include duplicates. The agency confirms it has been investigating the potential stopping problem in 675,000 Rogues since April.

Our sister station in Chicago also found drivers with the same problem when it comes to the Rogues' automated braking system.

Todd Burrows, a 2017 Nissan Rogue owner, said the very electronic feature that is supposed to help protect him is actually a safety hazard.

"The car just slammed that emergency brake," he said. "It's happened to me three times -- and that's three too many times." He says he's uncomfortable letting his wife and two small children in the car since his experiences with it coming to a screeching halt. "Then boom, it hit me like a ton of bricks. I was going 35 mph just stopped me basically dead," he said.

The Center for Auto Safety says it's received similar sensor complaints about the Rogue and other brands of vehicles.

Jason Levine, with the Center for Auto Safety, says it wants NHTSA to issue an official recall for the Rogues in question. "It's dangerous if the false trigger happens, then someone behind you could end up crashing into you because there is no reason," he adds.

A Nissan representative said when it comes to Cindy's issue - the dealer reprogrammed the Automated Emergency Braking (AEB) distance sensors in February and July. After each reprogram, the dealer test drove the vehicle with no further concerns.

When it comes to Chris Sellers, the representative said Nissan will contact him so a field engineer can look at his vehicle.

Regarding the customer comments on the NHTSA website, Nissan responded with this statement:

Nissan is committed to the safety and security of our customers and their passengers. Nissan has investigated this issue extensively. In consultation with both NHTSA and Transport Canada, Nissan launched field actions in early 2019 that notified all affected MY2017-2018 Rogue customers in the U.S. and Canada of a software update that improves AEB system performance. As always, Nissan continues to work collaboratively with NHTSA and Transport Canada on all matters of product safety.

As for Cindy, she tells me she is nervous driving her Rogue and wants Nissan to buy back the vehicle.

"I don't feel safe driving the car because you can't guarantee me the safety of me or my family when we are in the car," she adds.

The Troubleshooter Takeaway is to report problems like this to the dealership and manufacturer as soon as you notice it. Also be sure to file a complaint with the National Highway Traffic Safety Administration. If you don't report it, then there is no record of it happening.