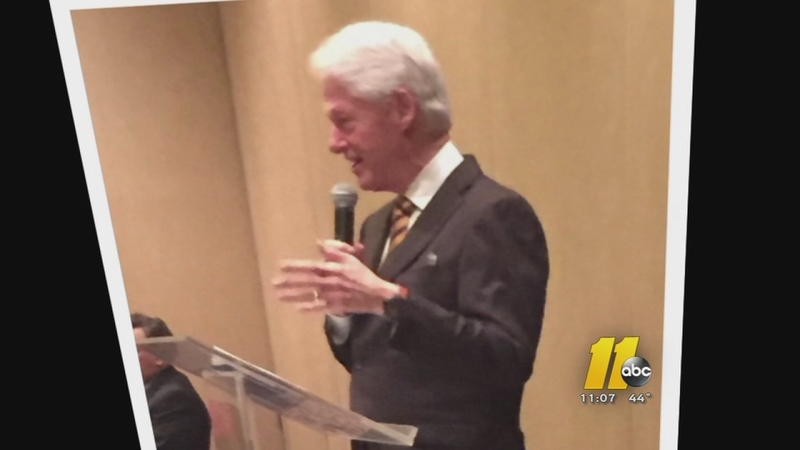 DURHAM, NC (WTVD) -- It was a who's who event Monday night at the Sheraton Imperial Hotel in Durham. Former President Bill Clinton hosted a fundraising event to stump for Democratic presidential candidate Hillary Clinton.

The $500 a person minimum event was private and media could not attend. But from the outside, we could see former North Carolina governors Jim Hunt and Bev Purdue walk in to attend the event.

When the event ended, Democratic Sen. Floyd McKissick of Durham shared what he heard from the former president. He said Clinton touched on topics like Benghazi.

"If it had been another situation that's comparable like when the embassy in Lebanon was attacked and over 200 people died under the Reagan years, it was never attacked the way Hillary's been attacked. It's unparalleled the attacks they've launched against her," said Sen. McKissick.

"When it comes to Trump, he's preaching divisiveness in this country. He's not coming up with any type of agenda that's going to bring people together and that's something we need to be deeply concerned about," said Sen. McKissick. "Hillary is probably the one who can best lead our country in that direction. Not to divide us but heal us in a positive direction."

When it comes to Trump and other Republican candidates a CNN poll out Friday shows Clinton in a close lead nationally.

In North Carolina, the most recent Public Policy Poll shows she's behind a few percentage points from Trump.

"I don't know that it matters, and every once in a while you may see her comment on a particular candidate if someone asks her about that candidate, but her focus has not been on trying to decide who is the best or worst person on the other side, because the polling is consistent, she leads any Republican challenger," said Bruce Thompson.

Thompson is a member of Clinton's campaign finance committee and head lobbyist for Parker Poe Attorneys and Counselors at Law.

Clinton supporters say North Carolina is an important state to win and hope people will head to the polls on March 15 for the primaries.

"North Carolina could take it over the top. I hope and trust it probably will, but I think it emphasizes the importance of the electorate of this state to come out and be engaged in this campaign and really come out and vote on Election Day," said McKissick.

"Bill Clinton visiting North Carolina on behalf of Hillary further shows she's the candidate of the past not the future. Hillary Clinton has proven time and time again she can't be trusted with the White House and North Carolinians have already rejected the Clinton machine three times before. This time will be no different," said Kara Carter, NCGOP Press Secretary.