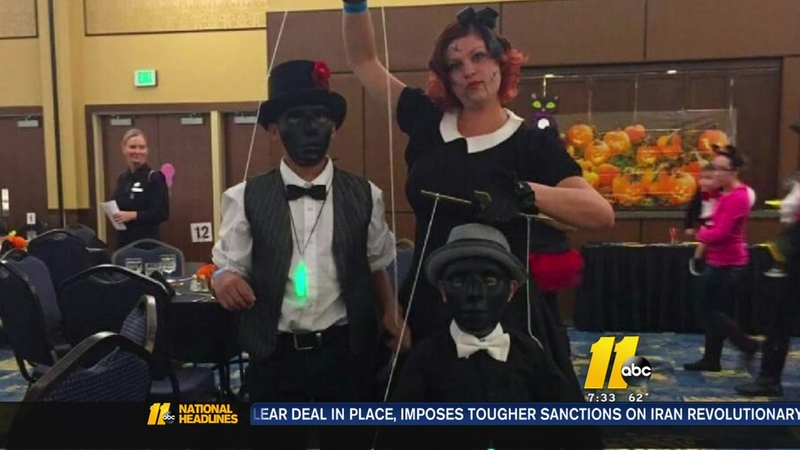 FORT BRAGG, North Carolina (WTVD) -- Genessa Bingham has close ties to Fort Bragg. Her father is deployed overseas and she's disturbed at the photo that was posted on Fort Bragg's Family and MWR Facebook page

"I think it's disgusting," said Bingham. "This is what's wrong with the country right now. People can just be as racist as they want. Then you're supposed to laugh it off. You know, segregation wasn't that long ago. My dad is African American."

The image shows a puppeteer appearing to manipulate two children posing as puppets wearing black face makeup. The picture was used to promote a "Spooktacular Halloween party" set to happen later this month. The caption on the Facebook post urged those attending to get their costumes ready.

"It's sending the wrong message to kids," said another local, James Pearson. "White people control black people, you know? That's the way I perceive it."

Fort Bragg's MWR Facebook page has since taken the photo down. It issued an apology saying the photo should not have been posted and does not represent the views of its organization.

Despite that apology, the Bingham family finds the post offensive and continues questioning why it happened.

"How can you expect us to want to support this installation and organization when you have no respect for our people?" asked Tammi Bingham.
Report a correction or typo
Related topics:
societyfort braggfayettevillecumberland countyrace relationsfort bragg news
Copyright © 2022 WTVD-TV. All Rights Reserved.
TOP STORIES
Snow, sleet, freezing rain expected again this week
NC legislature votes to further delay primaries until June 7
Third arrest made in Black Friday shooting at Streets at Southpoint
Daniel Turcios shot 5 times after crash on I-440, RPD reports
'He was special': Durham friends remember Andre Leon Talley
'We can't get any more': Stores struggle to restock shelves
Victim in fatal I-85 crash was just 3 months old
Show More
19-year-old charged in wreck that left 2 Marines dead
Earnhardt Jr. to be inducted into NASCAR Hall of Fame
Raleigh man feels lucky to be alive after bullet found above his bed
2-year-old accidentally shot himself in Harnett County
Biden, 1 year in, says nation weary from COVID but in a better place
More TOP STORIES News