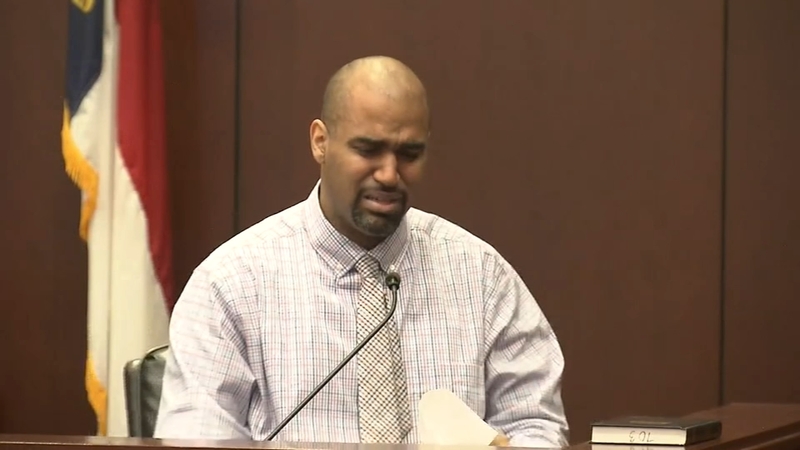 WAKE COUNTY, N.C. (WTVD) -- The Cary man accused of keeping his mother's body on ice in her bathtub for nearly a week before confessing to murdering her and his girlfriend in 2015 finally took the stand Tuesday, the fifth day of his trial.

Among the things he told the jury about was his mother's last breath.

"Die...die then. Die. And then we went to the ground and I'm like 'just die, if you want to die.' And she's there. So when she falls backwards and she's laying there," he said. "I'm like, 'if you want to die, just die.' And at that point, my mom, and it was the weirdest thing, she was lying down and when she hit the ground she was just like this. I'm just sitting there looking like...this is stupid, man. What are you making me do here?"

"It was like I wasn't living this life," he said.

And the jury heard what happened to his girlfriend the day she was killed.

"I stood up and I snapped," he said. "Boom. And I choked her (expletive) and I said...I'm thinking the whole time, 'this is all your fault. This is your fault.'"

After that, he said, he was disgusted with himself.

"'Cause I'm looking at this situation like, this is out of control. 'What have you become?'"

The 38-year-old said he didn't plan on killing his mother but was pushed to that point because she was provoking him.

He didn't answer any of the prosecution's questions, so the judge said he is going to take Tuesday night to decide whether to strike Lee's testimony in its entirety or declare a mistrial.

On Monday, as a psychiatrist testified about Lee's traumatic upbringing and dependency on alcohol, Lee became agitated and had an outburst in the courtroom.

The psychiatrist, Dr. Moria Artigues, was testifying that Lee's fall from Wall Street and modeling led to a downward spiral into addiction.
She said he was void of feelings and pointed to the confession tape, where he "matter-of-factly" described killing his mom and girlfriend.