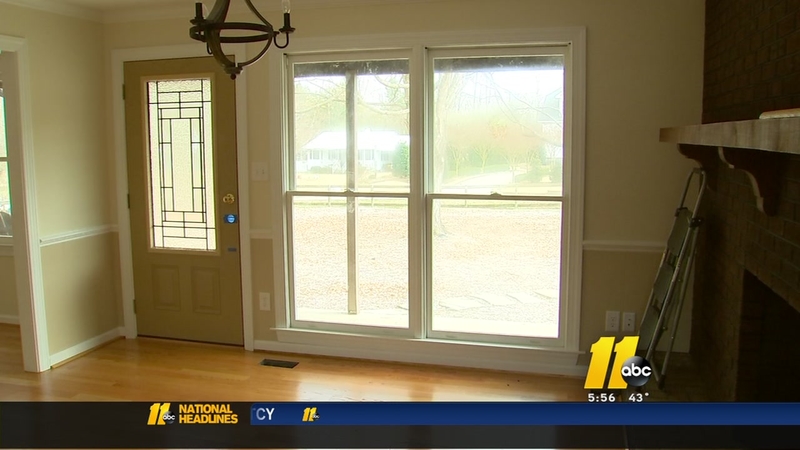 If you're hiring a contractor to do more than $30,000, the first thing you should do is make sure they are licensed.

In the state of North Carolina, you must be licensed to do work for more than $30,000.

You can easily make that check on the North Carolina Board for General Contractors website.

For Raleigh homeowner Ebb Barrington, he admitted he made that mistake.

Barrington hired Vogt Contracting, LLC to remodel the inside of his home and add a small addition in the back of his home.

"The day I gave the first draw I said do I need to get the required permits, and he said no I'll take care of it, that's my job and that's part of your total cost," said Barrington.

He paid Zach Vogt of Vogt Contracting $24,400 to get started on the job, and Barrington said that the work was progressing and he was happy with the job being done.

As planned, Barrington paid Vogt Contracting another draw of $24,900 as the remodel of his home continued.

He said when the majority of the work was getting completed on the remodel, Vogt asked him for the third draw in order to buy materials for the addition.

He asked Vogt for his money back from the last drawer since no work or materials ever happened on the addition.

Instead, Vogt sent Barrington an email with a breakdown of what was left to do, and that he actually owed $623.

Barrington disagreed with that figure and believed Vogt owes him money.

Once he got in touch with Vogt, he was told that the work was done based on the amount of money that was paid, and the job would not reach completion because Barrington couldn't be satisfied.

When it comes to not being licensed, Zach with Vogt admitted he is not licensed but claimed he didn't know at the time he had to be licensed.

Zach said he knows that now and plans to take his test soon to become licensed.

As for Ebb Barrington, he wants to move forward and hire a new contractor, but he said it's tough since he paid so much money for this unfinished job.

"I spent the majority of my life savings and borrowed money for this project, and here I am today," said Barrington.

Representatives at N.C. State Licensing Board for General Contractors have confirmed they have an active investigation into this case because of Ebb's complaint.

The best advice before you hire any contractor is to do your research.

If the job is more than $30,000 or even close to it, get that contractors license number and confirm they are licensed to do the work.
Report a correction or typo
Related topics:
businessnorth carolinabusinesslost moneytroubleshooter
Copyright © 2021 WTVD-TV. All Rights Reserved.
TROUBLESHOOTER
Are extended warranties worth it on back-to-school laptops?
60K students left NC public schools in 2020: What's driving the drop?
Watch out for scammers posing as your favorite Instagram accounts
Troubleshooter helps worker told she'd have to pay back $8k in unemployment
TOP STORIES
'He ghosted us:' Unlicensed contractor scams another homeowner
There's a mismatch between job seekers and open positions
'An amazing mom:' Friends mourn Apex teacher who died from COVID-19
Duke apartment residents warned about flooring, structural issues
LATEST: 1/3 of state employees ordered to be vaccinated are not
'More than hair': Fayetteville stylist helps those fighting cancer
Show More
'This is life-changing': Moore Co. man struggles with long-haul COVID
Authorities identify gunman who shot 15, killing 1, at TN Kroger
Residents push to change name of Raleigh's Cameron Park community
NCDOT sues Raleigh in effort to seize land for 540 project
Raleigh apartment residents frustrated after 4th fire in a month
More TOP STORIES News