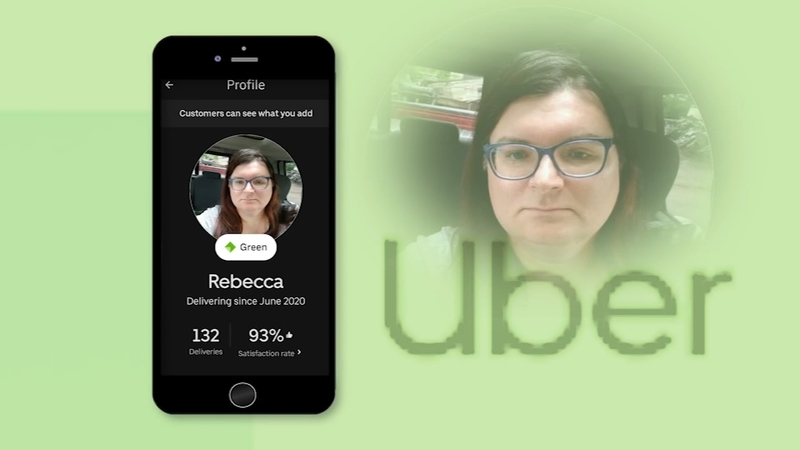 Rebecca has been driving for UberEats since May 2020. She uses the app and another food delivery program as her main source of income during the pandemic.

"In a job world where I need flexibility to be able to control my schedule due to health reasons, it works great," Rebecca, who asked ABC11 to only use her first name for privacy reasons, said.

A military veteran with fibromyalgia, among other health issues, Rebecca said she enjoys being able to show up to work when she wants. Most of the time, she said her interactions with customers are great. But twice, customers have reported that she is not who she claims to be.

Rebecca believes those reports came in because she is transgender. The first incident happened in August, and required a lengthy phone call with UberEats.

"They understood that I was trans and why someone might vindictively report me and said it would never happen again," Rebecca said.

Uber said it has a specific internal task force to protect transgender drivers and riders, as well as a specialized support team for driver issues related to transgender identity.

But even despite these company efforts, Rebecca said the same thing happened again.

Rebecca said Uber sent her differing explanations for why her account was deactivated--first, that someone else was using her account, then, because of safety violations. With no way to request an official appeal, she turned to Twitter for help.

"They use an algorithm for everything. There's no personalization," Rebecca said. "They claim inclusivity and they claim to protect you in cases like this, but I don't believe they will. I believe it's all about the bottom dollar."

She added that it would be impossible for someone else to use her account because UberEats requires users to take a photo of themselves wearing a mask upon signing into a shift, and randomly without a mask.

Troubleshooter Diane Wilson listened to Rebecca's concerns and reached out to Uber. A representative for the company contacted Rebecca and listened to her concerns.

"Apologized for what happened and asked for my opinion on how they can improve things," Rebecca said.

After ABC11 got involved, Uber reactivated Rebecca's account. Now, she's hoping for more understanding, both from the company and from her customers.

"I believe there's some people out there who don't understand, and not understanding something, sometimes they take it out emotionally in the form of push away, lash out, try to be hurtful," Rebecca said.

But in the meantime, she said she's glad she spoke up, and encouraged others to do the same.

"If you're treated unjustly, speak up. You can't effect change if you don't speak up," she said.