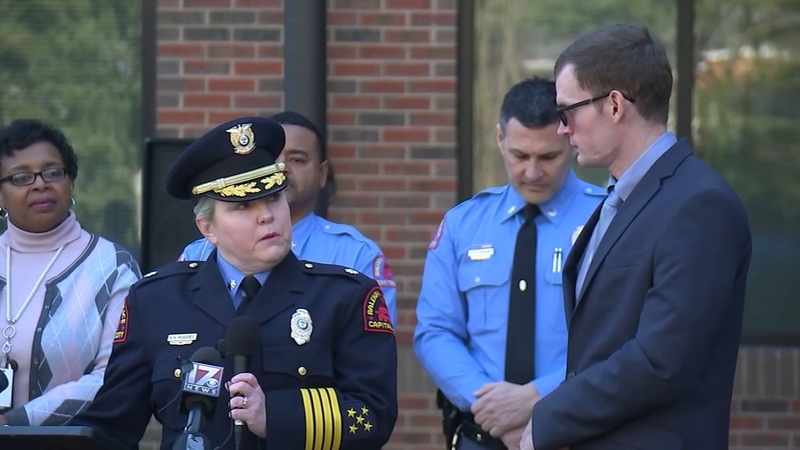 RALEIGH, N.C. (WTVD) -- After a year of recovery from being shot multiple times in the line of duty, Raleigh Officer Charles Ainsworth is ready to serve again.

On Jan. 9, 2019, Ainsworth was critically wounded after being shot multiple times while investigating a stolen vehicle at an apartment complex on Western Boulevard near Schaub Drive.

Four people were charged in connection to the shooting.

"Most employees can tell you where they were and what they were doing when Charlie had been shot in the line of duty and was in critical condition," said Deputy Chief of Police Karen Riggsbee. "But, we are a resilient department and just as quickly, employees responded in from home and deployed to the hospital and to the scene to help in any way they could."

Raleigh police officer Charles Ainsworth who was shot and severely injured in the line of duty a year ago today returns to work. A big reception is waiting for him. Watch live here: https://t.co/RDCX0zyTOR #ABC11 pic.twitter.com/8gmz303DxV

In the past 12 months, Ainsworth endured numerous surgeries and grueling physical therapy.

Ainsworth was released from the hospital in April. In October, he completed the Oktoberfest 4-Miler, a 4-mile race in Raleigh.

Last month, Ainsworth took to Twitter telling his supporters, "Just stay in the fight, you guys. I've definitely gotten in better shape. I have to get myself a six-pack."

Officer Ainsworth has given us the greatest gift of all this holiday season... a positive attitude and commitment to getting stronger! #AinsworthSTRONG #MondayMotivation #HappyHolidays pic.twitter.com/FoySnKWfev

Among the crowd that showed support for Ainsworth were plenty of the Wake County community including the Wake County District Attorney's Office prosecutor and Gaston Perry, a Raleigh citizen whose Sunday school class took up donations to help Ainsworth's family.

A spokesperson for the Raleigh Police Department said Ainsworth will be on administrative duty "for now."

We are grateful to welcome Officer Charles Ainsworth back to service today, one year after he was critically injured in the line of duty. Come cheer him on at 11AM as he enters the building at 6716 Six Forks Rd. #AinsworthStrong #LawEnforcementAppreciationDay pic.twitter.com/9uQEvedU31