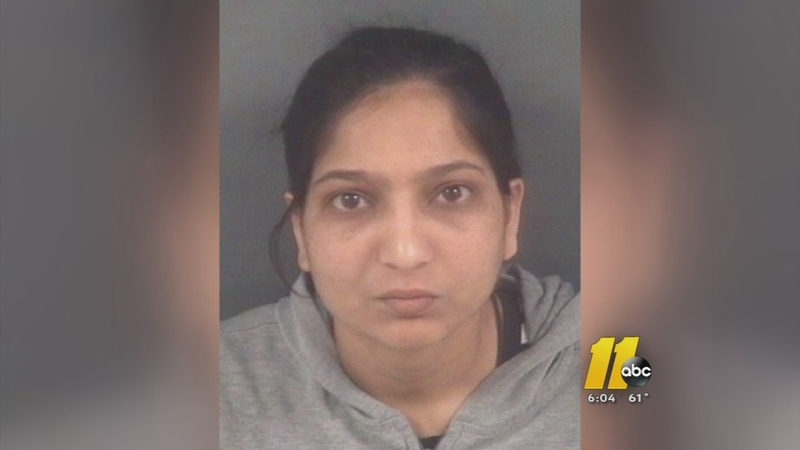 Police said EMS responded to the family's Mont Drive apartment regarding a call of the baby having seizures about 9:30 p.m. on Nov. 25. It remains unclear who made the emergency call.

The baby girl was taken to Cape Fear Valley Medical Center where doctors determined the infant had a brain bleed.

She was then taken to Duke Medical Center for more treatment. After further examination, doctors found rib fractures, ankle fractures, and a femur fracture.

On Thanksgiving Day, Spring Lake Police were contacted by a Cumberland County social worker. Authorities conducted an investigation and interviewed Patel, as well as the three other adults living in the home. They determined the injuries to the baby were not accidental.

Patel was taken to the Cumberland County Detention Center under a $10,000 secured bond. Her first court appearance was scheduled for Wednesday.

Police confirm Patel, her husband, and their child lived in the apartment with another couple. They are local business owners who employed the Patels. The other adults living in the apartment are not considered suspects.

Authorities say the child's father was among those interviewed Thanksgiving Day. He is not a suspect in the case #abc11Eyewitness

"I have sympathy for any infant and the children who can't defend themselves," said Curtis Worthy, who rents the apartment to the Patels. "You really feel sorry for them."

Worthy said the younger Patel couple moved into the upstairs Mont Drive apartment about two years ago. The business-owner couple lived downstairs, moving in a few years prior. He said they were always family-oriented, good tenants.

Worthy said there were no adverse warning signs prior to the Thanksgiving Eve incident. He said his prayers are with the family, especially Patel and her newborn daughter.

"I pray that if she needs mental, medical help that she receives it, and then I pray that the child gets all the help possible," Worthy said.

The baby has been released from the hospital and is in the custody of the Cumberland County Department of Social Services.

An earlier version of this story said the baby was 6-months-old because of an initial press release that misstated the baby's age.