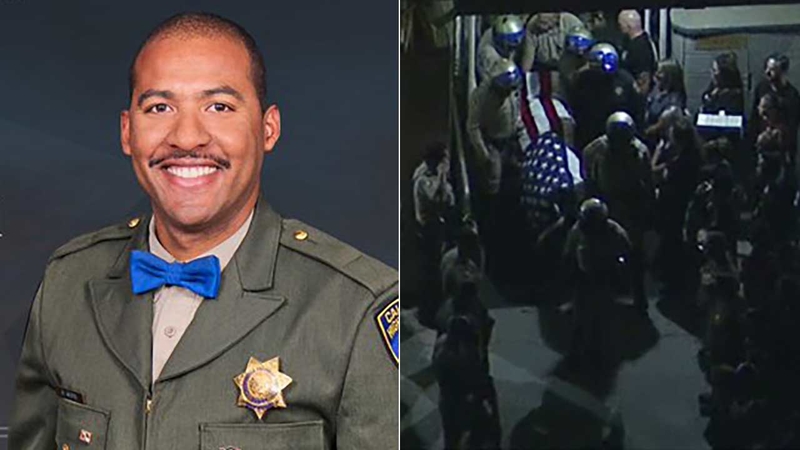 RIVERSIDE, Calif. -- An outpouring of grief continued on Tuesday for a slain California Highway Patrol officer who was killed in a shootout with a gunman in Riverside that left two fellow officers wounded.

CHP Officer Andre Moye Jr. was doing paperwork to impound a pickup truck just off the 215 Freeway about 5:30 p.m. Monday when the driver reached into the vehicle, suddenly grabbed a rifle and opened fire, authorities said.

Other CHP officers responded and joined what Riverside's police chief described as "a long and horrific gun battle," followed by police officers and deputies from nearby agencies. The gunman was killed in the confrontation, whose motive remains unknown.

Eyewitness video shows a man clad in dark clothing firing a rifle at CHP officers in Riverside. One officer and the suspect were both killed in the gun battle.

"Our hearts ache over the tragic loss of @CHP_HQ's own Officer Andre Moye - who will be remembered for his commitment to service and the community of Riverside County," Gov. Gavin Newsom said on Twitter.

At a Tuesday press conference, Chief Bill Dance described 33-year-old Moye as a "very caring and giving person" who had been with the the Highway Patrol for about three years, serving the past year as a motorcycle officer.

Dance said he spoke with Moye's mother who told him that working for the CHP was his dream job.

"Officer Moye embodies everything that the California Highway Patrol stands for with professionalism, dedication and service to the public. Andre had a servant's heart and that's why he was a member of this organization," Dance said.

Dance added that Moye is survived by a large family including his wife, mother, father, stepfather and several siblings.

CHP Commissioner Warren Stanley said he was "devastated by the tragedy that unfolded earlier in Riverside."

Members of the public and law enforcement community bringing flowers and flags to the @ChpRiverside station where Officer Andre Moye was assigned. He was killed in a shootout with a suspect last night. Update at 1pm. pic.twitter.com/NXymYCkZgp

Elsewhere on social media, hundreds of people paid tribute to Moye, whose body was escorted from a Moreno Valley hospital to the coroner's office by a phalanx of law enforcement officers.

The credit union for California Association of Highway Patrolmen has established a memorial fund in honor of Officer Moye.

One-hundred percent of all donations received will go directly to his family. Donations can be made on the CAHP Credit Union website.

One of the two officers who were wounded in the shootout suffered a minor injury, while the other remains in the hospital with serious gunshot wounds to his legs, police said. Both are expected to recover.

In an interview, the gunman's father identified him as 49-year-old Aaron Luther, adding that the son recently seemed depressed, was having knee pain and marital problems.

@RiversidePolice released this booking photo of CHP shooting suspect Aaron Luther from a 2015 incident. He has records of six arrests in Riverside County. He also served time in state prison around 2004. pic.twitter.com/juih1oO49R

Luther has a lengthy criminal record, including a conviction for attempted murder back in 1994, according to the California Department of Corrections and Rehabilitation. He was sentenced to 12 years in prison and was released on parole in 2004. He's been arrested several times since.