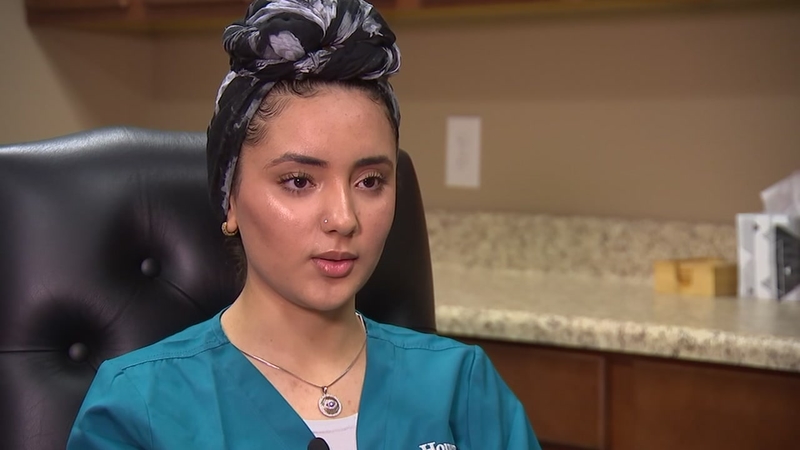 CNA saves a life on her first day of work

CHAPEL HILL, N.C. (WTVD) -- On the very first day of her career, an 18-year-old certified nursing assistant who recently graduated from high school saved a life.

Wgoud Mansour graduated from the City of Medicine Academy in Durham a few weeks ago.

And she took a summer-before-college job with Homewatch Caregivers in Chapel Hill.

On June 19, she was given her first assignment.

She went to the home of a Chapel Hill couple in their late 80s for a 12-hour shift caring for the wife.

"As the day progressed on we noticed that her husband was just kind of anxious, not really having a good day," Mansour told ABC11.

It wasn't long before she discovered the man lying unconscious in a hallway.

She summoned his wife.

"I was hoping that when she talked to him he would respond to her instead of me probably," Mansour said. "But when he wasn't responding to either of us, that's when I called 911."

She detailed for the dispatcher the man's condition including that he had a low pulse rate.

"He was breathing very shallow and just short breaths. She told me to start CPR," she said.

So she started chest compression using the routine she had practiced so often but never imagine she would put to use on day one as a CNA.

Mansour added, "It's definitely not the same as doing it on a real human being as doing it on a mannequin. So I just tried to bring out everything that they taught us in the training. How you had to push down hard."

She says she did two rounds of 10 compressions.

Then she checked his pulse again.

It was going back up, and he was coming around, she said.

"I was definitely happy, relieved. Happy that the wife, you know, saw that he was progressing."

The owner of Homewatch Caregivers has been in the business 16 years and has never heard of a first-day story like this.

"This is very rare that someone on their first day on the job gets to do that. Someone who's never had one day of work experience. That's awesome," Anzor Gachechiladze told ABC11.

He said the hospital told him the she likely saved the life of the elderly man, who was in cardiac arrest.

To that Mansour had a humble response.

"It was my first day but, you know, it's part of the job," she said. "You know you have to be prepared. And it's also like saving a life, it should be the first thing that you try to do. So to me it's just, I don't think I did anything heroic."

Hearing that comment, Gachechiladze noted the young woman's humility saying, "Every hero says that. But you know in my eyes and everybody else's she is a hero. I mean, she saved a man's life."

Mansour said she is grateful for the praise from everyone including her parents.

And she was especially touched by her mom's reaction, a former nurse who inspired her daughter's budding medical career.

"It was definitely a good feeling of satisfaction because I've always looked up to my mom," she said. "So seeing that she was very proud of me just made me feel like I was doing the right thing you know. I was making her proud and that's the most important part."