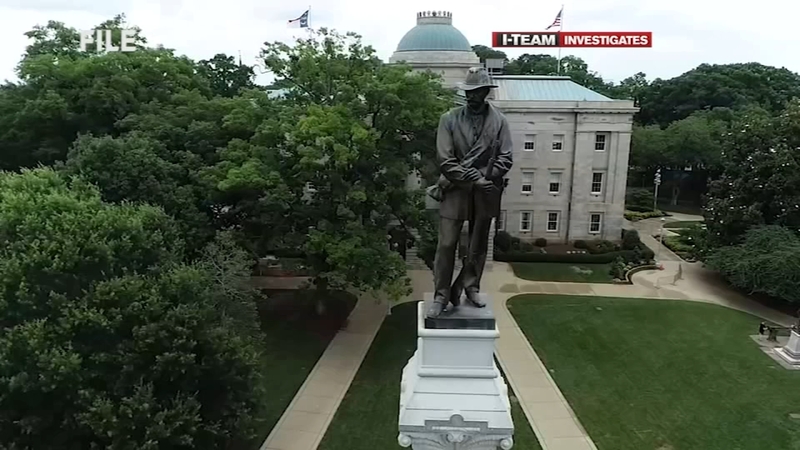 RALEIGH, N.C. (WTVD) -- Right or wrong, monuments to the past are being judged by what their presence means for future generations.

"You can not judge people 100 years or 150 years ago by today's values or standards," said Frank Powell, commander of the Sons of Confederate Veterans North Carolina Division. "Laws change, society changes, culture changes. You cannot judge people in the past by today's standards any more than people can judge us 100 years from now."

The Sons of Confederate Veterans, a group with more than 3,000 members statewide, is threatening to sue Governor Roy Cooper over the removal of what's left of the 75-foot pillar, and two other Confederate monuments on the State Capitol grounds.

"They've been there more than 100 years," Powell said. "When one is moved it must be replaced within 90 days or placed in a location in similar prominence. I would argue there is not place of equal prominence in North Carolina to the State Capitol grounds."

In North Carolina, state law prohibits the permanent removal of an "object of remembrance located on public property" with severely limited exceptions. The law, passed in 2015 by the Republican-led General Assembly and signed by former Governor Pat McCrory, has already been cited by the NC Historical Commission in its vote against relocating the Confederate monuments from the State Capitol to Bentonville Battlefield.

The statute does allow for temporary removal of monuments for public safety - an avenue that other entities, including Pitt County, is taking when it comes to its own monuments, including an obelisk outside the courthouse in Greenville.

"We're forming a committee to find an appropriate place to have this statue located," Pitt County Board of Commissioners Chairman Melvin McLawhown said. "The people have spoken. I don't think it's the mob, I think it's people of good conscience. We've had white citizens, especially young whites, that are tired of seeing this statue representing injustice and hatred at the courthouse. I think the George Floyd movement capitalized on that."

The I-Team analyzed state historical records and updated its previous research, counting 106 monuments, markers and memorials to the Confederate States of America and its fallen soldiers.


Their presence, supporters say, is a painful reminder of North Carolina's loss of more than 40,000 soldiers during the Civil War--the largest among Southern States. Indeed, the loss equaled 6% of the population at the time, which in today's numbers would surpass 500,000.

"The Union monuments tend to have the 'Preserve the Union' or 'Save the Union', whereas the southern monuments have a theme of mourning," said Ernest Blevins, a Civil War Historian. "There are funeral symbols on them saying 'this is our loss.' The monument movement was about those communities' efforts."

But those who want the monuments removed said the statues represent hundreds of years of systemic oppression.

"What more is there to say?" one demonstrator said Friday evening. "It's a Confederate statue. The Confederacy was based on keeping slavery."

Two demonstrators explained why they felt the Confederate statues outside the Capitol should have been removed a long time ago.

The first of North Carolina's monuments to the Confederacy was dedicated in 1868, but the vast majority--92--were dedicated after 1900, including three in the new millennium. The majority of them, as well, are publicly owned and stand prominently in front of courthouses, in town squares and at busy intersections. There are some that are in battlefields and some in cemeteries, and others sitting on private property such as a church (Duke University, as a private institution, was able to remove a statue of Robert E. Lee from the famed Duke Chapel).
Report a correction or typo
Related topics:
politicsraleighncdata journalismi teamconfederate monumentrace in americaconfederacy
Copyright © 2022 WTVD-TV. All Rights Reserved.
I-TEAM
Monthly tax credits end, force some NC families to make cuts
Body camera footage shows moments after Jason Walker's death
Ethics commission dismisses allegations against FPD Chief
More than $10M of PPE left in the rain in CA county
TOP STORIES
2 children hospitalized after car crashes into Chapel Hill playground
RDU scrambles to resupply deicer after runway mishap during snow storm
It's official: Supersonic jet startup Boom to land in North Carolina
Man denied heart transplant because he has not received COVID vaccine
Fayetteville mother, daughter missing since 2016 found safe
LATEST: COVID hospitalizations rise, cases drop
Pedestrian killed on Highway 401 in Garner
Show More
Minority students, alum react to UNC Affirmative Action case
Worker killed in Benson home-construction site accident
Apple CEO allegedly stalked by woman who showed up at house
Travel experts suggest booking your getaway soon
Amid blood shortage, calls for easing donation restrictions on gay men
More TOP STORIES News