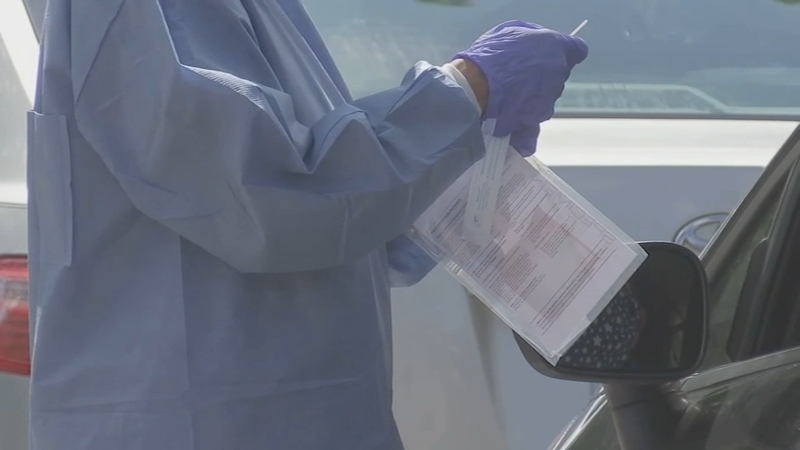 RALEIGH (WTVD) -- North Carolina, like many other states across the country, is seeing an uptick in COVID-19 cases.

Labor Day COVID surge?
As Americans get ready to celebrate the end of summer, health officials are once again urging the public, particularly those who are still unvaccinated, to act responsibly during the Labor Day weekend, given the country's ongoing struggle with the virus.

"First and foremost, if you are unvaccinated, we would recommend not traveling," Centers for Disease Control and Prevention Director Dr. Rochelle Walensky said during a White House COVID-19 briefing Tuesday.

Holidays, which often entail traveling and large gatherings, have proven to be a catalyst of rapid COVID-19 spread across the country.

Last year, in the weeks prior to Labor Day, the country was experiencing a steady decline in COVID-19 cases, with the national daily case average falling to approximately 38,000.

However, the late summer holiday weekend set the stage for the country's most significant viral surge of the pandemic. Between mid-September and Thanksgiving, the nation's daily case average rose by more than 400%, followed by a record-setting influx of hospitalizations and deaths.

Testing sites closed
Wake County COVID-19 testing sites will be closed Monday to give staff Labor Day off. The sites will reopen at 7 a.m. on Tuesday. At that time, county officials anticipate longer lines. Wake County residents can also order a test to be shipped overnight to your home here.

DCoPH clinics, including the walk-in COVID-19 vaccination clinic, will re-open on Tuesday, September 7.

Is the mu variant worse than delta? What to know about COVID-19 mutations

Vaccine hesitancy eases in teeth of the delta surge: POLL
Vaccine hesitancy has subsided in the face of the delta surge, with the share of Americans who are disinclined to get a coronavirus shot now just half what it was last January. Support for mask mandates is broad and President Joe Biden's approval for handling the pandemic has dropped sharply.

Alongside the steep rise in cases, there's been a jump in perceived risk of catching the virus, from 29% in late June to 47% now, the latest ABC News/Washington Post poll finds. Yet worries about the consequences of infection are moderate, expressed by 39%, partly reflecting broad awareness of vaccine efficacy.
While 75% of adults have gotten a shot, per data from the Centers for Disease Control and Prevention, some hesitancy persists. Among unvaccinated adults, about 7 in 10 are skeptical of the vaccines' safety and effectiveness, 9 in 10 see vaccination as a personal choice rather than a broader responsibility and just 16% have been encouraged by someone close to them to get a shot. Each is an impediment to uptake.

Further, few unvaccinated Americans, 16%, say the FDA's approval of the Pfizer vaccine makes them more likely to get a shot; 82% say it makes no difference. And among those who work, again just 16% say they'd get a shot if their employer required it; many more say they'd quit.

The poll, produced for ABC News by Langer Research Associates, finds approval of Biden's handling of the pandemic dropping steeply, from 62% in June to 52% now. Forty-one percent disapprove, with the rest undecided. (Biden's overall approval rating is just 44%, pulled down by criticism of his handling of the Afghanistan pullout, as reported Friday.)

Boosters could begin Sept. 20
The U.S. government's top infectious disease expert says he believes delivery of COVID-19 vaccine booster shots will be able to start Sept. 20 for Americans who received Pfizer doses, while Moderna's may end up rolling out a couple weeks later.

Dr. Anthony Fauci told CBS' "Face the Nation" Sunday that it is still the Biden administration's plan "in some respects" to begin the third doses the week of Sept. 20, pending approval by the Food and Drug Administration.

The administration had hoped that both Pfizer and Moderna booster shots would be rolled out at that time. But Fauci said it is "conceivable" that for Moderna's, there might be "at most a couple of weeks, a few weeks delay, if any," while the company provides more data to the FDA on the booster's efficacy.

President Joe Biden on Aug. 18 touted boosters as a protection against the virus' more transmissible delta variant, and said Americans should consider getting a booster eight months after their second shot.

Ron Klain, Biden's chief of staff, said Sunday the administration had always made clear that Sept. 20 was a target date, and "No one's going to get boosters until the FDA says they're approved."