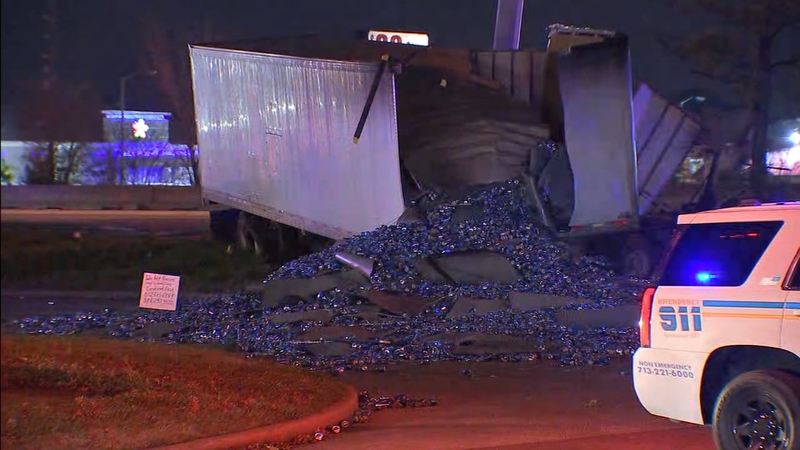 HOUSTON, Texas -- Authorities continue investigating the cause of a fatal 18-wheeler crash that caused a load of empty beer cans to spill on the road.

According to Harris County deputies, the 18-wheeler was headed southbound on I-45 north near Richey Road when it suddenly left the roadway.

The driver crashed into the guardrail, a grassy area and into a tree. Authorities say the impact sheared open the tractor portion of the 18-wheeler, spilling out empty Bud Light beer cans.

@HCSOTexas units are at a major crash involving an 18-wheeler that jackknifed and the driver was ejected from the cab. The driver was confirmed deceased at the scene. Southbound main lanes & feeder road of North Fwy (16500 blk) are shutdown north of N. Vista. #HouNews #HouTraffic pic.twitter.com/XCrHYvdxC5

At the time of the crash, authorities say the driver was not wearing a seatbelt and was ejected from the cab. He ended up face down on the freeway and suffered apparent trauma to the body, broken bones and facial injuries, according to deputies.

A witness at the scene told authorities he heard a portion of the crash before the 18-wheeler went off the road.