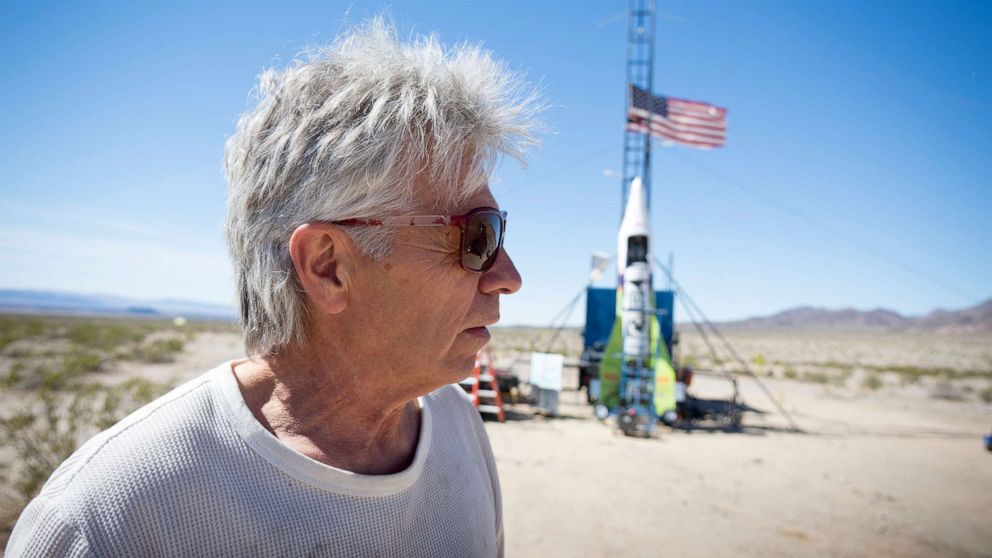 A daredevil has died after crashing in a homemade rocket he had launched himself while filming a program.

"Mad" Mike Hughes, 64, died on Saturday near Barstow, California, after a rocket that he had built and crashed into the ground on private property at approximately 1:52 p.m. on Saturday near Highway 247, according to the San Bernardino County Sheriff's Department.

"In a cosmic quest to explore the final frontier on a shoe-string budget, Mike Hughes and Waldo Stakes have built a steam powered rocket that will launch "Mad Mike" 5,000 feet into the air," said an article on the Science Channel, owned by the Discovery Channel, that has since been updated to confirm Hughes' death. "As ground-breaking and awe-inspiring as this event will be, it is only the first step towards an even more ambitious goal in space exploration."

Justin Chapman, a freelance journalist, told the Associated Press that he and his wife witnessed the crash and that the rocket appeared to rub against the launch apparatus which might have torn the parachutes attached to it.

"It was unsuccessful, and he passed away," Waldo Stakes, a colleague who was also at the rocket launch, told AP.

"A man was pronounced deceased after the rocket crashed in the open desert during a rocket launch event. Medical aid was staged for the launch and was on scene immediately," read the statement. "Sheriff's Aviation and Specialized Investigators have responded to conduct the investigation."

This was not Hughes' first launch. Hughes, who believed the Earth is flat, propelled himself about 1,875 feet into the air before a hard landing in the Mojave Desert in March of 2018.

"My story really is incredible," Hughes told the AP at the time. "It's got a bunch of story lines -- the garage-built thing. I'm an older guy. It's out in the middle of nowhere, plus the Flat Earth. The problem is it brings out all the nuts also, people questioning everything. It's the downside of all this."

According to ABC News' Houston station KTRK, the rocket launch was intended to be one of three featured in a new Science Channel series, "Homemade Astronauts," which was chronicling the story of self-financed teams "in their cosmic quest to explore the final frontier on limited budgets." The steam powered rocket was supposed to launch Hughes 5,000 feet into the air.

"Our thoughts and prayers go out to his family and friends during this difficult time," said the Science Channel. "It was always his dream to do this launch, and Science Channel was there to chronicle his journey."
Report a correction or typo
Related topics:
abc newsnational
Copyright © 2021 ABC News Internet Ventures.
More Videos
From CNN Newsource affiliates
TOP STORIES