North Carolina rallies together for World Down Syndrome Day 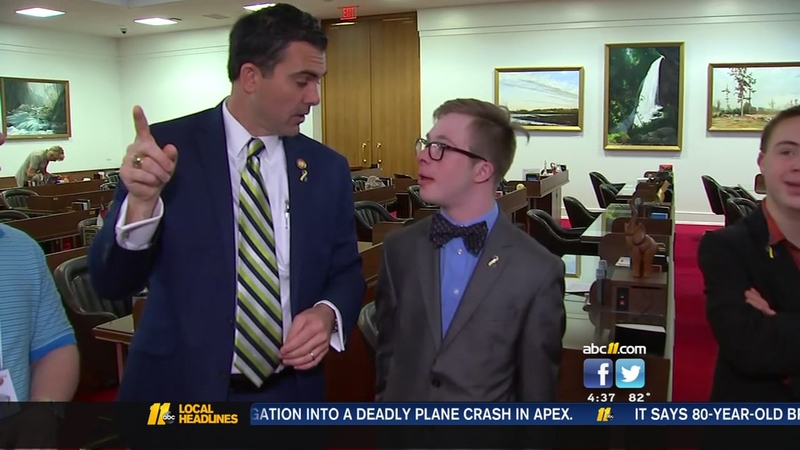 NC rallies together for World Down Syndrome Day

RALEIGH, North Carolina (WTVD) -- Advocates and lawmakers are now working together to raise awareness about Down syndrome.

On Tuesday, many advocates gathered at the North Carolina Legislative Building for the first Down Syndrome Advocacy Day.

She said the event got started to grab the attention of legislators.

"Every piece of legislation that they write has an effect on individuals with Down syndrome," said Beckmann.

She's pushing for a change for those affected by the disorder, especially her 16-year-old son, Thomas.

"We are considered to have special needs," Beckmann said. "Our needs are like everyone else. We need friendship. We need an education so we can have a good job, so we can have sustainable employment, so we could buy our own health insurance and not rely on Medicaid. But until those programs all catch up and individuals with Down syndrome are welcomed into the community, we need more help from the government."

Matthew Schwab, 19, volunteered at the GiGi's Playhouse booth, a nationwide network dedicated to changing the way the world views Down syndrome.

"It is a place for people with Down syndrome to go, congregate, get support, have purposeful programs, learn, and have exciting and fun times," said Matthew's mother, Michelle.

The Schwab family opened GiGi's North Carolina location, and Matthew said it holds a special place in his heart.

"This shows the true potential in individuals with Down syndrome like me," Schwab said. "It kind of shows the resources that are provided from medical, financial, vocational, and support."

Schwab, who attends Holly Springs High School, told ABC11 there was one lawmaker he really wanted to meet.

"I would like to meet Mr. Bradford," he said.

Schwab was in shock when Bradford walked right up to him and introduced himself.

Bradford gave students a personal tour of the house chambers and Schwab said he was happy to meet one of his heroes.

"It's basically almost like a dream come true because there's only a number of people that I really do admire as personal heroes and Mr. Bradford here is one of them," Schwab said.

But Schwab might have made a bigger impression on Bradford.

"It's stuff like this that makes the job worth it," Bradford said.