One year later and 60 pounds lighter, Duke play-by-play man happy to be back in the booth 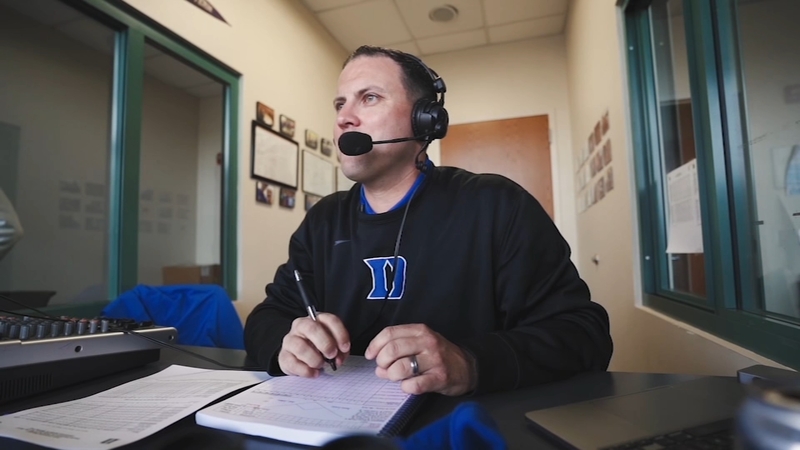 1 year after sports were halted, Duke announcer happy to be back

DURHAM, N.C. (WTVD) -- One year ago, we met up with Duke baseball and women's basketball play-by-play man Chris Edwards. The pandemic had just begun and he was freshly out of a job with no sports to broadcast. It was a situation that would ultimately extend all the way to December. A year later, we spoke to Edwards again, to see how he's navigated the fallout of the coronavirus.

"I'm headed to the ballpark today to have a chance to call a baseball game and just thankful for every opportunity," Edwards said.

It's Tuesday and Edwards is in his happy place, behind the mic calling a Duke baseball game.

"This afternoon, it's the 26th all-time meeting between the Duke Blue Devils, and the North Carolina Central Eagles" he calls out to an empty Durham Bulls Athletic Park.

For the better part of last year, Edwards wasn't sure when he'd be back in his familiar spot. Like most of us, he thought COVID would surely be over by fall. And then it wasn't.

Throughout months of unemployment and uncertainty Edwards was sustained by a few things, his wife certainly foremost.

"Probably been one of the best things for our marriage just to be able to be around each other and say 'OK, this is you. You're my wife, I'm your husband. This is why we love each other," Edwards said.

Also invaluable? His network of friends.

"I think that's the one thing that has humbled me the most is just how much people have reached out and have been willing to help and willing to say hey whatever I can do to lend a hand," Edwards said.

Edwards also used his time off to make a major life change. Through diet and exercise, he has lost 60 pounds in the past year.

Back in the broadcast booth now, all seems relatively right with the world again. There's just one thing missing.