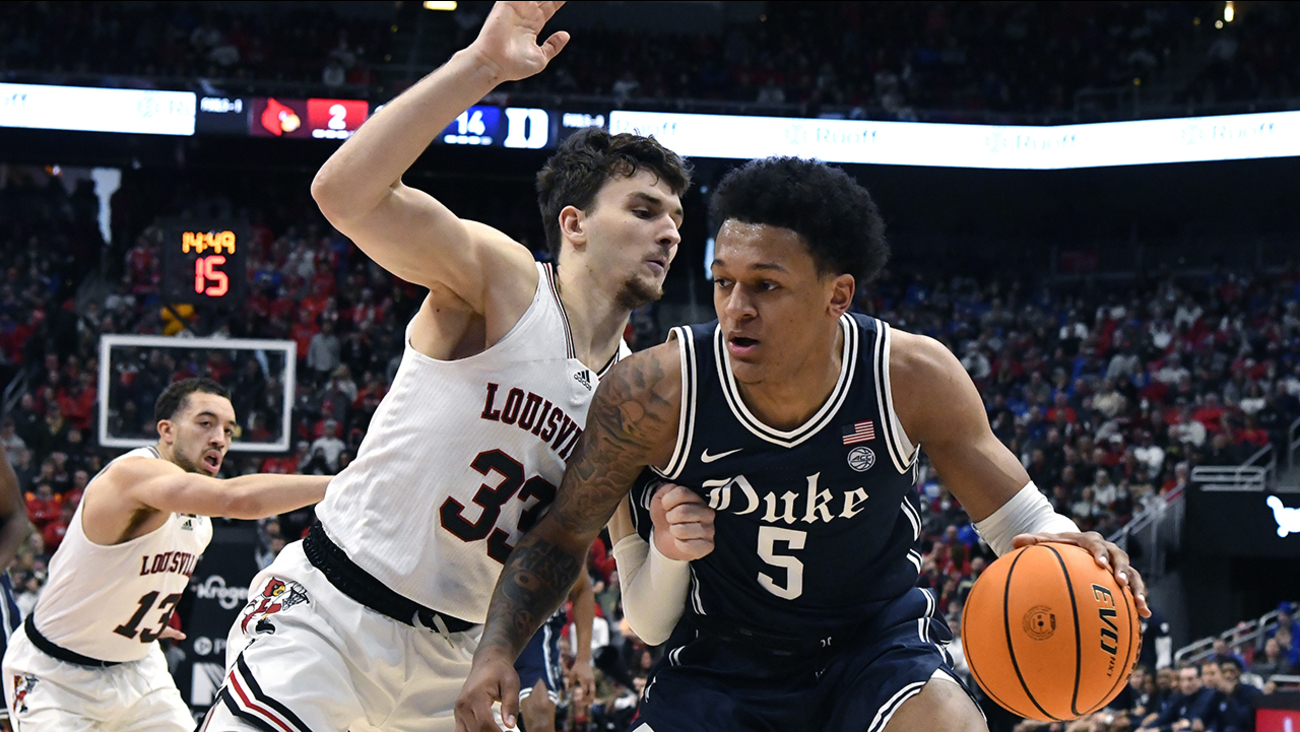 LOUISVILLE, Ky. -- AJ Griffin didn't hesitate as he twice got the ball in his hands in a tight, tense game.

The Duke guard just followed his instinct and hoisted away from deep, showing emotion both times his big shots fell for the No. 9 Blue Devils against Louisville.

Griffin tied a career high with 22 points, including consecutive 3-pointers during a late 12-0 run that helped Duke escape Louisville 74-65 on Saturday.

"I was really just not even thinking about it," Griffin said of making 3s just 56 seconds apart. "I was just letting it fly and having the confidence from my coaches and teammates. ... Just playing basketball."

Griffin also made a buzzer-beating 3 from about 30 feet before halftime.

The Blue Devils (17-3, 7-2 Atlantic Coast Conference) led 24-8 after 10 minutes before Louisville eventually rallied to forge several ties, the last at 60-all on El Ellis' long 3-pointer with 8:28 remaining. Wendell Moore Jr.'s two free throws put Duke back up 62-60 before Paolo Banchero and Mark Williams followed with timely blocks, the latter of which set up Griffin's critical 3 to make it 65-60.

The freshman guard then followed Williams' block of Mason Faulkner with another big 3 for an eight-point lead with 4:50 left. Banchero added a jumper and Williams a layup for the double-digit cushion that helped Duke earn its third consecutive victory and fifth in six contests.

"He's had games like this, but they've been at home," Krzyzewski said. "He's not a rising good player. He's a rising star. And all our guys realize that.

"They're trying to stop those guys and all of a sudden he's open. And the good thing is that the guys will look for him. But he's never nervous."

Ellis had 18 points off the bench and Dre Davis 16 for the Cardinals (11-10, 5-6), who fell short in Mike Pegues' second debut as interim coach. Pegues led Louisville to a 5-1 start while head coach Chris Mack was suspended and took over again on Wednesday after Mack and the school agreed to part ways.

Louisville never led and lost for the sixth time in seven games. While Pegues took heart in the Cardinals' improved intensity that sparked the comeback, he wished the Cardinals showed that aggression on the defensive glass as Duke grabbed 20 offensive rebounds and outscored them 22-5 in second-chance points.

"Duke is Duke, but that being said, I didn't think that Duke was necessarily better than us today," Pegues said. "I thought they were tougher than us. And that bothers me."

Griffin made all five 3s taken and finished 8 of 13 from the field. Williams added 14 points with 11 rebounds and two blocks, while Banchero had 11 points on 5-of-15 shooting with a career-high 15 boards and a block. Duke outshot Louisville 44%-42%, holding the Cardinals to just 33% after halftime.

The Blue Devils also outrebounded the Cardinals 47-34, including 20-10 offensively. 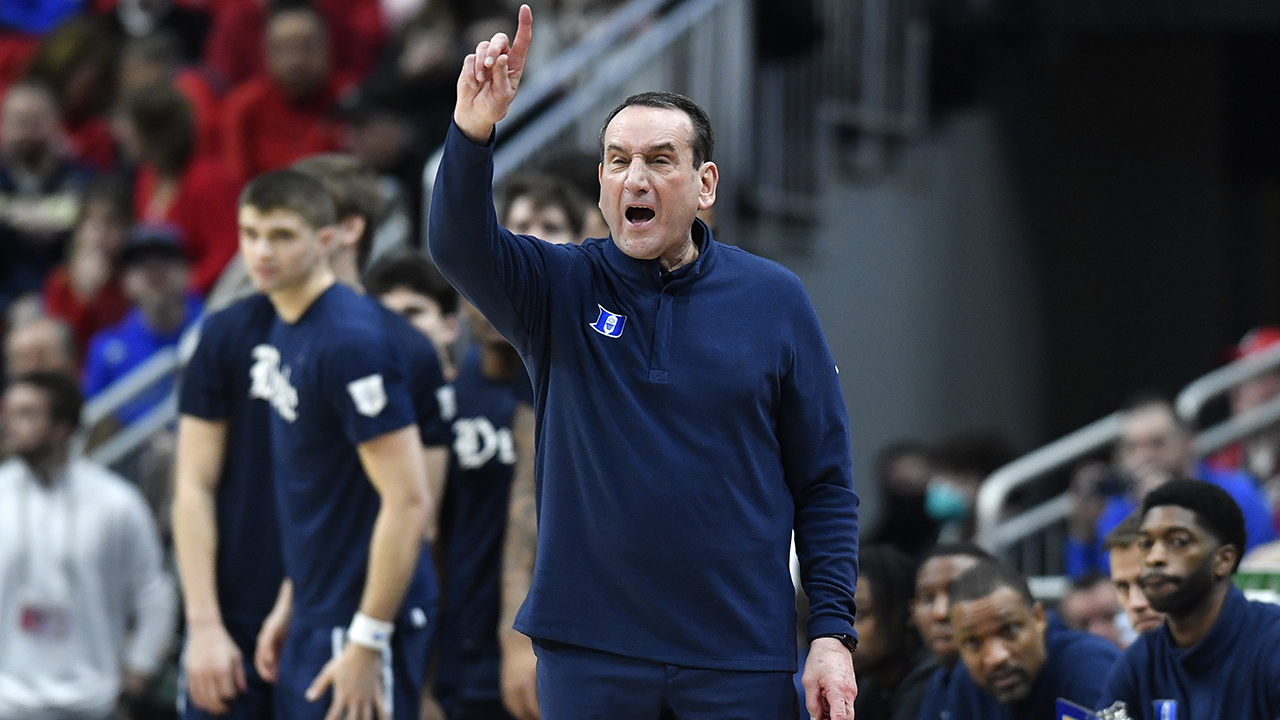 Louisville presented Mike Krzyzewski with a blue-and-white Louisville Slugger bat and Kentucky bourbon with his face etched on the bottle.

Krzyzewski picked up more parting gifts on his farewell tour, this time with a Kentucky flair. Former Louisville coach Denny Crum, a fellow Hall of Famer, and Pegues presented him with a blue-and-white Louisville Slugger bat and Kentucky bourbon with Coach K's face etched on the bottle. Crum and Krzyzewski hugged, smiled and talked briefly before player introductions.

"They could not have honored me in higher manner than to have Denny here," Krzyzewski said. "He's one of the true icons of the game and someone that I've admired my entire life when he worked for (UCLA) Coach (John) Wooden and the amazing job he did here.

"That was really special. I hugged him a few times," Krzyzewski said.

The Blue Devils created plenty of looks, especially in the paint. That led to a lot of layups and dunks as they outscored Louisville 42-26 in the lane. Those chances made a difference, though not as much as Griffin's sharp shooting from behind the arc when Duke needed it.

Changing coaches didn't appear to have an initial impact as the Cardinals quickly trailed by double digits. But Pegues kept on urging his team from the sideline, and they soon found the energy that had been lacking. The Cardinals strung together baskets to eventually tie the game and stayed close but could not get over the hump. The performance was still good enough to earn a big cheer from their biggest crowd (18,493) this season a week after getting booed off the floor against Notre Dame.

Duke visits Notre Dame on Monday night in a game rescheduled from Jan. 1.