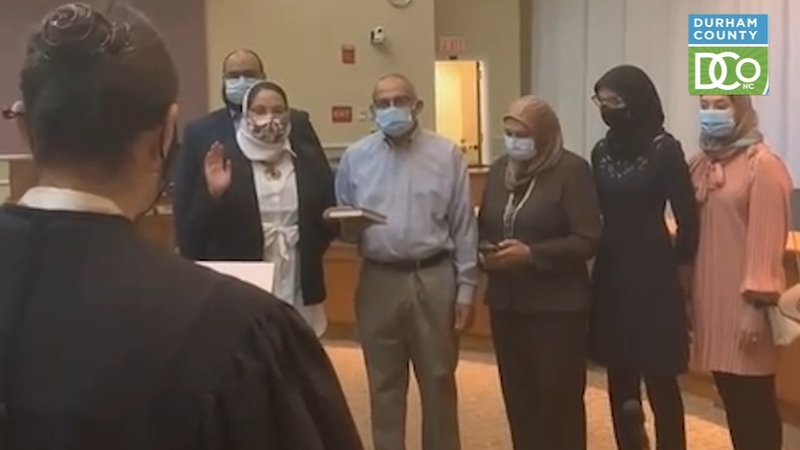 DURHAM, N.C. (WTVD) -- The swearing-in of an all-female Durham County Board of Commissioners is historic.

Nimasheena Burns and Nida Allam became the newest Durham County Commissioners on Monday morning when they were officially sworn into office.

They join Brenda Howerton, Wendy Jacobs and Heidi Carter on the 5-member board--marking the first time in the board's 139-year history that all seats were filled by women.

"I was really happy to have my parents, my sisters and my husband there with me, and to be sworn in by Justice Anita Earls was really historic and monumental for me," Allam said.

Allam is also the first Muslim woman to be elected to public office in North Carolina.

She tells ABC11 that she will work with the new board to correct underlying issues that led to disparities in Black and brown communities, like jobs, healthcare, housing and access to food.

"I really do believe that women have that natural instinct to lead, and we have that ability to lead," Allam said.

This summer, there was a third-party investigative report into allegations of racial bias and violations of ethics between Commissioner Heidi Carter and County Manager Wendell Davis.

Although both claims were dismissed by the investigator, the report revealed several fractured relationships.
The investigator even called the board 'dysfunctional' and said it's members needed to find ways to build trust.

"I want to see this entire board succeed," Allam said.

"As a history making board we have an opportunity to demonstrate cohesiveness about how we operate as board members with decency and respect," said Howerton.

Those trainings are expected to happen next month.