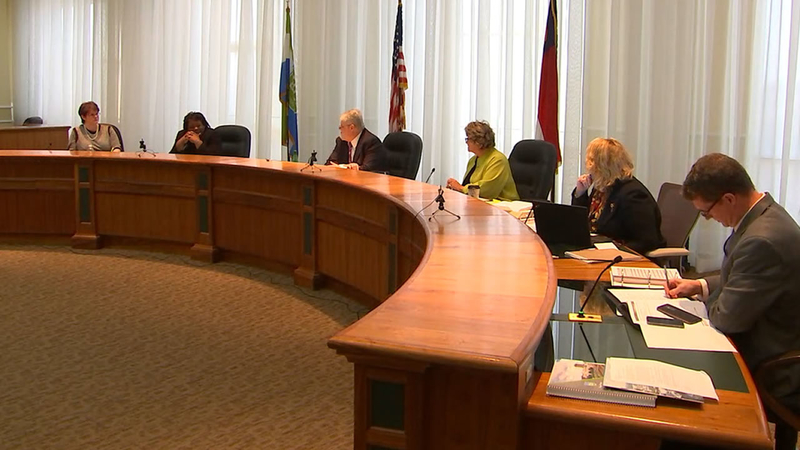 DURHAM (WTVD) -- The Durham Board of Elections voted 2 to 1 Wednesday morning to hold an official evidentiary hearing Friday on the results of the November election.

The two Republicans on the board voted in favor. The lone Democrat voted against.

The move came after Republican lawyer Tom Stark, who lives in Durham County, filed a formal protest alleging "malfeasance" in counting the ballots.

Republicans have raised questions after there were problems uploading the results from five early voting machines on election night.

"This came up on Election Night because Durham was late reporting its early voting. It seems to me that they have a procedural issue in the way they do early voting," said Stark.

However, the machines have a tape backup, and the results were manually input into the system. That's why there was a late add of 94,000 votes on election night. That late addition from Durham pushed Roy Cooper slightly ahead of incumbent Pat McCrory in the governor's race when Cooper had been trailing.

CLICK HERE TO READ MORE ABOUT THE GOVERNOR'S RACE

ES&S officials said they were confident in the results shown on the tape, but Stark told board members he wanted a recount.

Friday's formal evidentiary hearing will be to determine if there's probable cause to hold a recount.

Stark also raised questions about the early voting process and the security of the voting machines if they are left locked up in polling places. A Durham election official explained that the machines are locked and only site supervisor has the key. The paper ballots are removed every night, the results tabulated, and then the ballots are brought back to election headquarters and placed in a vault.

Dawn Baxton, the lone Democrat on the Durham Board of Elections, said nothing she heard at Wednesday's hearing convinced her of the need for a recount.

"Consistent and identical to what was actually uploaded to the software that it did capture. So I do not believe there's enough evidence here to proceed with the evidentiary hearing," she said.

But speaking before voting in favor of holding a formal hearing, Durham County Elections Board Chairman William Brian Jr., a Republican, said he doesn't see clear evidence that a recount would change the results, but feels that based on the challenge it is best to go forward with a hearing.

"Our past precedent is we set a fairly low bar as to the question of whether we have an evidentiary hearing," he said. "I think we should err on the side of giving people the opportunity to make their points."

Brian then addressed the larger issues of voting in Durham and race.

"Mr. Stark and others feel that there's something fishy going on here and I understand why they might feel that way. On the other hand, there are others in the community who wonder why it's always Durham that needs to recount its votes," he said.

"The basis for that argument is this is a community with a large African American population and there is a stigma associated with it somehow that in communities with large African American populations that we have to recount twice because we can't trust them. I don't appreciated that at all. I don't appreciate the comments that have been made to various people in the public that cast aspersions on Durham. Durham has a long history of conducting good elections. We had one bad experience in the last primary, but we've dealt with that."

CLICK HERE TO READ MORE ABOUT THE MARCH PRIMARY

"We are pleased the Durham County Board of Elections decided to move forward with proceedings and hopefully will begin to get answers to the many questions people have. Last night, the State Board of Elections released an affidavit from one of their staff that identified at least 6 errors in Durham's reported numbers, and these public officials must make sure that all of their reported numbers are 100% accurate. We believe it is in everyone's best interest to get to the bottom of what happened so that people can have faith in the results, process and system." - Ricky Diaz, Pat McCrory Campaign Spokesman
Related topics:
politicsdurham2016 electionroy cooperpat mccrory
Copyright © 2022 WTVD-TV. All Rights Reserved.
TOP STORIES
RDU adds new airline, another adding several new routes
In video, 'angry' NC Gov. Cooper pushes for stronger gun laws
Timeline breaks down Uvalde shooter's movements day of massacre
TX school shooting leaves at least 19 children, 2 adults dead
Columbine survivor reacts to Texas elementary school shooting.
Person County Habitat for Humanity looking for volunteers
Wake County educator weighs in on gravity of another school shooting
Show More
Should you talk to young kids about mass shootings? And how?
NC schools use tool made after Sandy Hook shooting to protect students
Former Capital Cities/ABC Chairman and CEO Tom Murphy dies at 96
NC Medicaid expansion closer to reality as Senate leader shows support
Wake County moms demand change after Texas elementary school shooting
More TOP STORIES News