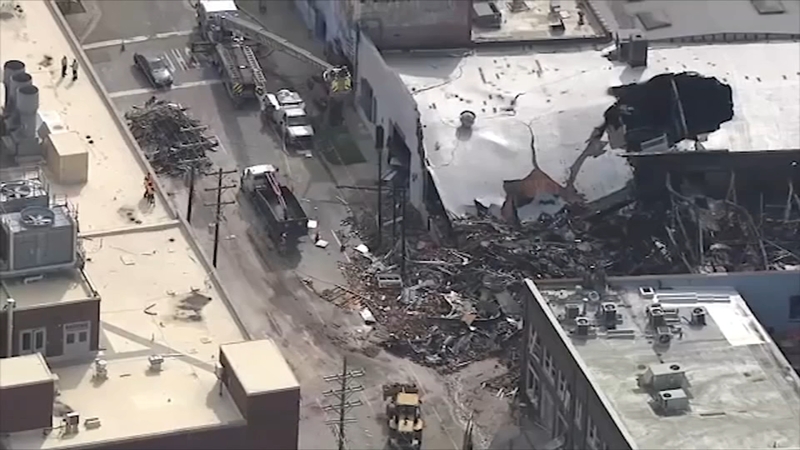 The department released its Origin and Cause Investigation Report about the deadly explosion Friday afternoon.

The report follows a three-month investigation in which more than 25 people were interviewed, and numerous processes, 911 calls, and videotapes were examined and reviewed.

The first 911 call reporting a smell of gas occurred at approximately 9:11 a.m. by a woman who was driving in the area.

Key investigation findings in the report revealed that the explosion occurred at 115 North Duke Street when "an explosive atmosphere was created when a gas service line was struck during a horizontal boring operation.

This breach allowed fugitive gas to flow until reaching an ignition source, at which time an explosion occurred resulting in severely damaged and destroyed buildings. As a result of the explosion, several persons, including firefighters, were injured and two fatalities occurred," the City of Durham wrote in a release.


The report also concluded that the gas was ignited by an "undetermined source within 115 Duke Street leading to the explosion," and that there is no "evidence of criminal intent by any company or individual to warrant criminal prosecution."

"This report provides a wealth of information about how the explosion actually happened, including when the natural gas line was struck by Optic Cable Technology LLC, when the gas was first detected, and the actions of the firefighters prior to the explosion, including the evacuation of the involved buildings," Chief Robert Zoldos said. "This report fulfills our responsibility to thoroughly investigate and document the origin, cause, and circumstances of the explosion, according to NFPA-921 standards, which outlines how investigations should be conducted."

The report, which contains timestamped photos and summaries of interviews, also provides a detailed analysis of the conditions, weather, the exterior and interior of the buildings impacted, and of equipment and materials that were involved in the explosion.

Meanwhile, residents in West Village are still waiting to have their windows, many of which were shattered by the blast, replaced.
sha
"I think it's a frustrating situation for everyone. It wasn't their fault and it wasn't our fault -- it's no one's fault," said Kristen Buehne, who lives i nWest Village. "I would love windows but very thankful I wasn't at the coffee shop. I'm grateful for most people's safety. I'm still upset that we lost lives."

A spokesperson for the Conner Group said the window-restoration project is scheduled to be complete next month.

"Our vendors are currently working to repair the windows damaged during a gas explosion near West Village Apartments. The original repair timeline was delayed due to necessary approvals from the Historic Preservation Committee and insurance claims processing slower than expected," said Amanda Brown with the Conner Group. "We have prioritized repairs in all occupied units, and the project is scheduled to be 100 percent complete in September."

Bart Halpern, who relocated from New Jersey, moved into West Village the day before the explosion.

"I was moving in that morning of the explosion and I was out on the street here with the car, the trunks open and I'm trying to bring stuff up into the apartment," Halpern said. "I had no clue what was going on -- I didn't know if it was a factory. All of a sudden everybody ran outside and they were pointing and they said something blew up. I decided to get in my car and drive the opposite way so I wasn't stuck here."

Halpern said the plywood walls and boarded windows have become the new normal at West Village.

Brown said "repairing the damages in our community remains a top priority for us at West Village."